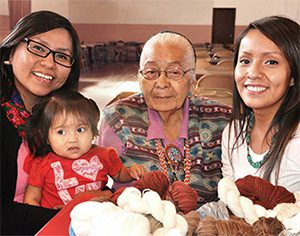 Despite the growing numbers of elders from different races, ethnicities, and sexual orientations, many of these older individuals are still marginalized when it comes to finding or accessing services and supports. That’s also true for those family members who care for them, according to a panel of experts at the recent Aging in America conference in New Orleans.

Representatives from the Diverse Elders Coalition, a consortium of groups advocating on behalf of older adults from Hispanic/Latinx, American Indian and Alaska Native; Asian American, Pacific Islander, and Native Hawaiian; Black and African American and lesbian, gay, bisexual, and transgender (LGBT) communities, stressed the need to improve support those who care for these different populations.

“Health of older adults is largely dependent on people who care for them,” said panel moderator Jenna McDavid, the Coalition’s national managing coordinator. Yet caregiving is one of the most overlooked challenges facing this country.

It’s important to understand both the cultural nuances and they types of resources needed to meet such diverse needs, according to Joon Bang, president of National Asian Pacific Center on Aging. His organization represents some 50 ethnicities, who speak more than 100 languages and is the only national organization working to serve Asian American and Pacific Islanders (AAPI) as they age.

“Any missed opportunities for caregiving leads to guilt, because the culture of caregiving is embedded in our DNA,” Bang said. While many adult children and grandchildren feel overwhelmed by caregiving, and don’t know where to turn, they’re reluctant to admit they need help.

In the Latino community, many of those caring for parents and grandparents are millennials, said Yanira Cruz, Dr.PH, president of the National Hispanic Council on Aging. It’s often difficult to reach this group of family members because they don’t see themselves as formal caregivers; they’re just being a good grandson, niece, or daughter, she said.

AARP found that one in four of the 40 million family caregivers in the U.S. are millenials, and estimates about 27% of those are Latino.

Yet, they are putting in long hours in this role, while holding down a paying job, often making less than $30,000 a year. “And, they’re exhausted,” Cruz said. They need to remain healthy but it’s a challenge finding appropriate community resources.

Among the Native American population, the situation is even more diverse. There are more than 500 federally recognized tribes and communities, excluding those recognized only at the state level or are unrecognized, according to Larry Curly, executive director of the National Indian Council on Aging.

“We need to understand this population has a unique relationship with the federal government. We need to treat each tribe as a unique sovereign entity, like they are 560 different states,” he explained.  Each has a unique governing structure, depending on whether they are more traditional or more acculturated and incorporated. That means programs and services have to be tailored to how each tribe functions.

“We come up with all this jargon; but we don’t know what a caregiver is. All we know is we take care of our people. We don’t call it that. It’s what we do,” Curly said.

Among this population, caregiving for elders is a community responsibility, not only an individual one,” he said. So programs and services need to address the whole community, rather than only targeting individual family members.

What does family caregiving look like in the LGBTQ community when family can look a lot different?

“In the absence of support of families of origin we’ve created families of choice, very strong and very resilient,” said Michael Adams, the CEO of the advocacy organization SAGE.

Caregiving is deeply embedded in the reality of LGBT community culture, Adams said. “It stems out of the AIDS epidemic when many gay and lesbian family members were ostracized and there was no one else to take care of us but each other.”

Yet these caregivers are often not treated by the health system the same as blood relatives. Discrimination and stigma are still an issue in some localities. Adams says it’s critically important for LGBT caregivers to have culturally competent resources that speak to the realities of caregiving for this population.

Among the more than 50 Southeast Asian American communities, politics and history have helped to define family caregivers, according to Quyen Dinh, executive director of the Southeast Asia Resource Action Center.

They also have higher rates of unique health needs such as PTSD, that often stem from being survivors of war, Dinh said. “These communities face significant health and caregiving challenges, plus they must deal with the additional stigma of being identified as refugees or immigrants.”

In addition to language barriers, literacy is also a problem for older AAPIs. Well-meaning agencies produce information that doesn’t meet the needs of this audience, whether they’re caregivers or elders. “So ask what they really need in terms of education and outreach,” Dinh said.

Regardless of the ethnic or cultural background, Cruz reminded the audience it is important to create safe spaces in which caregivers and older adults can ask questions and find resources. It should be a place where they’re not afraid to come out and seek help, without putting anyone at risk.

To further hone in on the needs of these many different family caregivers, the Diverse Elders Coalition recently launched a national family caregiving survey, available in six languages, with additional languages to follow.

It’s one of the first times caregivers in these disparate communities have been asked about their needs and issues of importance to them. The goal is to use the data in developing policies and programs to help health care providers and advocates better meet the needs of diverse family caregivers. Initial results are expected sometime in the next few months.