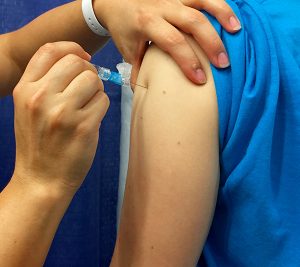 The medical evidence is clear – vaccines are safe and effective – but a small minority of people refuse, or remain unable, to accept medical evidence. Since that small minority can have a substantial impact on public health more broadly, journalists have to capture the micro and the macro while balancing storytelling with facts.

As Washington state and New York state have continued battling measles outbreaks this year, most journalists have reported thoughtfully and responsibly on the outbreaks themselves and the larger issue of vaccine hesitancy and refusal. They’ve continued a trend that solidified during the Disney theme park outbreaks several years ago, when journalists finally began leaving media mistakes of the past – primarily false balance on the issue – behind. (Curtis Brainard’s excellent, ever-relevant 2013 CJR article “Sticking with the Truth” traces this history well.)

But now there’s a somewhat new challenge to confront: Over the past several years, social media has played an increasing role in the distribution of information and the public discourse about vaccines. During the 2016 presidential election, for example, Russian bots and trolls appear to have used Twitter to spread misinformation about vaccine safety.

Some journalists, such as Australian Associated Press political reporter Angus Livingston have been taking a more active role in countering the misinformation on social media. Livingston and others took to Twitter to highlight how false information about vaccines has spread on Facebook and Google. Their work caught the attention of House of Representatives Intelligence Committee Chairman Adam Schiff, D-Calif. Schiff, according to The Guardian. Schiff tweeted on Feb. 20 that he had written to the CEOs of Facebook and Google expressing his concern that misinformation on their sites was encouraging vaccine hesitancy and undermining public health.

Within weeks of the legislator’s letter, Facebook announced it would make it harder for people to find anti-vaccine content on its platform. Pinterest also responded with a concerted effort to diminish the sharing of false vaccine information, The Guardian reported. Google, which owns YouTube, responded by pulling ads from videos that promote anti-vaccine content, The Verge reported. Because journalists (and social science researchers in their studies of these problems) shone a light on how users and algorithms on popular sites caused vaccine disinformation to spiral out of control, those sites began taking action (or saying they’d try) to rectify a problem contributing to the public health issue of vaccine hesitancy.

The response from those who have long battled against vaccine misinformation, such as Paul Offit, M.D., director of the Vaccine Education Center at Children’s Hospital of Philadelphia, has been positive (while acknowledging how overdue these moves are). But journalists should remain skeptical and watch how this social-media-fights-back story unfolds.

As Alexis Madrigal reports at The Atlantic, Facebook has long hidden behind the “it’s just too complex” smokescreen for dodging the problem of flourishing anti-vaccine pages on its site. Will Facebook, Google, Instagram and other such influential sites follow through on clamping down on the misinformation? Or is this bluster that will pass when the measles outbreak finally resolves and the public’s attention focuses on a new crisis? And if these companies do follow through, will that drive anti-vaccine advocates to other sites that journalists should keep an eye on? The realm of vaccine information dispersal on social media sites is just one of many angles journalists can pursue in writing about vaccine hesitancy.

To help reporters as they seek out and report on other such angles, a new tip sheet on how to responsibly cover vaccine hesitancy is now available.