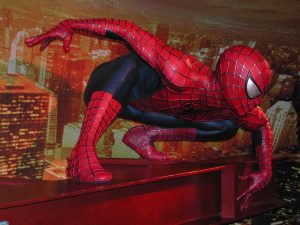 We journalists rely on many tools in our trade: research articles, books, interviews, pen and paper, accumulated knowledge and experience, PR folks, smartphones, software, voice recorders, cameras, etc. But every once in a while, one tool outperforms the rest: our Spidey sense.

I can’t count the times my intuition has nudged me in the right direction or diverted me from the wrong one, and you’d be hard-pressed to find an experienced reporter who would say otherwise. (Yes, intuition is probably a not-so-magical concoction of perception, knowledge, experience and possibly the statistical anomalies we call “luck,” but let me have this one totally-non-evidence-based superpower, okay?)

My own Spidey sense saved me a lot of embarrassment and at least one story correction recently. The funny thing is, due diligence would have saved me just as easily, especially if I’d followed the advice of Kate Howard, managing editor of the Kentucky Center for Investigative Reporting, whose AHCJ webcast in January was aimed at preventing the exact trap I nearly fell into. My near miss: I chose not to quote “Dr.” Damian Jacob Markiewicz Sendler, alleged sexology expert extraordinaire, who, at 28, claimed to have an M.D. and Ph.D. from Harvard Medical School and a list of accomplishments long enough to strain credulity — as it should.

In a HIGHLY RECOMMENDED exposé at Gizmodo (seriously, go read it), reporter Jennings Brown exposed how this remarkable fabulist lied his way into dozens of mainstream news stories with his “medical expertise” and titillating “research” about unusual, deviant or illegal sexual behavior.

A few friends were among those who felt foolish after the Gizmodo article went up because they had quoted Sendler in stories, but I don’t sniff at them. They’re smart, ethical, conscientious, hard-working journalists who were duped on deadline. Sendler appears nearly as skilled at fabrication and misrepresentation as Frank Abagnale Jr. of Catch Me If You Can fame (though caught much sooner), and I’m among countless journalists who quoted Brian Wansink. Gizmodo’s Brown did a lot of researching and interviewing — and probably diving down rabbit holes — to root out all Sendler’s lies.

A cursory Google search wouldn’t have exposed Sendler. I know because I Googled him myself when I was contemplating using his quotes on a story that wasn’t even related to sex research. (It was — no joke — about hospital patients’ voting. Sendler claimed to have “co-created a hospital-based program that pairs volunteer high school students with the elderly patients who require help,” including feeding, taking medications, registering to vote and actually voting. His shame knows no bounds: He told me that ensuring patients, especially the elderly, could vote was “about social responsibility and engaging with patients” and that “providing patients with social services, including the right to vote, is just part of extended care.”)

I’ll never know if he did any actual voting outreach (I doubt it) because I didn’t check it out. I Googled him, found his supposed breadth of expertise on every imaginable (and sometimes unimaginable) sexual behavior and combed through his website. (It currently has only a dubious statement responding to the Gizmodo story, but the Internet Archive has much of it, including 56 of his news/media appearances.)

What I didn’t do: any of the things Jennings Brown did, including look up whether he had a medical license, call his universities to confirm his degrees, contact his alleged thesis advisers/colleagues/mentors or even do the math on whether his accomplishments seemed remotely plausible at 28. Those are also, incidentally, many of the things that Howard recommends in her webinar. (Tip sheet coming soon!)

I remember deliberating over whether to include Sendler’s anecdote and quotes in my story, but something about him seemed … off in a way I couldn’t pinpoint. I’d like to say I’d have checked him out more closely had I decided to use his quotes. Perhaps I would have, but I was on deadline. I may have done what many colleagues did: trust that the dozens of reporters whose stories popped up on my cursory Google search had done their due diligence. (That said, it was the huge number of stories quoting him that gave me pause in the first place.)

I’m grateful for my Spidey sense, but intuition isn’t a good foundation for maintaining my credibility as a journalist. While I feel fortunate not to be a chump in this case, I learned a lesson: follow Howard’s advice and make 15-minute background checks on every source an indispensable part of my reporting.