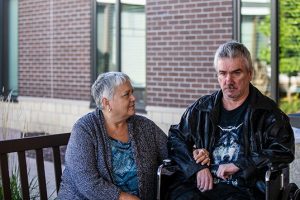 Photo : Kelsey Kremer, Des Moines RegisterLinnea and Gailen Clausen share a moment outside the central Iowa nursing home where he lives, three hours away from their northwest Iowa home. Other nursing homes rejected Gailen Clausen, 55, because his early onset dementia caused confusion and anxiety, which sometimes led him to be aggressive toward staff.

Nursing homes are supposed to be places that care for ill, frail adults — many of whom also suffer from Alzheimer’s and other forms of dementia. The disease takes a terrible toll on those who have it, whether it’s forgetting who their loved ones are, forgetting how to eat or use the toilet, or sliding into a state of agitation and violence. That’s the time when more nursing homes are saying “enough.”

And, as Tony Leys writes in this article for the Des Moines Register last fall, they’re kicking them out, sometimes even if there’s nowhere else for them to go.

It’s not a story unique to Iowa as Leys pointed out. This AP story, which ran in Modern Healthcare back in 2016 reported on the increase in complaints nationally about unwarranted evictions of difficult patients. And stories by Jordan Rau and Judith Graham of Kaiser Health News looked at the challenges in assisted-living facilities to care with residents with dementia and why some are evicted. Even memory care units are “involuntarily discharging” some residents, as this piece in the Vermont Digger reported.

For his story, Leys examined the challenges families face when their loved ones are no longer welcome at local nursing homes, and the hoops they must jump through to find a safe, appropriate environment to care for them. Sometimes that means another city, hundreds of miles away. It’s a situation he had wanted to report on for several years.

But before he could begin writing, he had to find families who were willing to talk publicly about their situation. “I declined to do an anonymous-source story, because it wouldn’t resonate with readers. It would read like fiction,” he explained in this How I Did It piece. That may have been the hardest part. Patience paid off. Not only did he eventually find three families for on the record interviews, several readers contacted him after the story ran to share their own family traumas.

It’s a good lesson that can help other reporters seeking interviews with families who may be reluctant to go on the record.