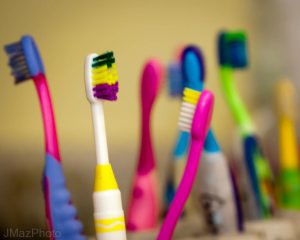 The good news is that nearly 80 percent of American kids are brushing their teeth by the age of 1, according to federal data.

The bad news is that nearly 40 percent of them may be using too much toothpaste, new research from the Centers for Disease Control and Prevention suggests.

To help prevent tooth decay, the CDC recommends that people of all ages drink optimally fluoridated water; that toothbrushing should begin with the emergence of a child’s first tooth; that all children receive a dental visit by the age of 1 and that children aged 2 and older brush twice daily using fluoride toothpaste.

But when it comes to toothpaste, portion control is particularly important for children younger than 6, stressed members of a team of researchers from the CDC who authored the study, “Use of Toothpaste and Toothbrushing Patterns Among Children and Adolescents – United States, 2013-2016.”

Young children, whose reflexes are not fully developed, may accidentally swallow toothpaste. The ingestion of too much fluoride while the permanent teeth are developing can result in dental fluorosis, a mottling, pitting or discoloration of the enamel.

The CDC recommends that children up to the age of 3 use a smear of fluoride toothpaste no larger than a grain of rice; children between the ages of 3 and 6 are advised to limit themselves to a pea-sized portion.

In many cases, that is not what is happening, researchers warned.

“In this study, 38 percent of children aged 3 to 6 reportedly used a half or full load of toothpaste, exceeding current recommendation for no more than a pea-sized amount,” concluded the study team, led by CDC dental officer Gina Thornton-Evans.

In the study, published Feb. 1 in the Morbidity and Mortality Weekly Report, the authors encouraged health care professionals and organizations to educate parents about best toothbrushing practices, so they might better help their children take good care of their teeth.

“Careful supervision of fluoride intake improves the preventive benefit of fluoride, while reducing the chance that young children might ingest too much fluoride during critical times of enamel formation of the secondary teeth,” the authors noted.

In other findings, the study concluded that some children began brushing later than the recommended age.  The trend was most noticeable in Mexican-American families, where more than 22 percent of children began brushing at age three or older. Children living in lower income households, and in a homes where the head of the household had less than a high school education were also more likely to begin brushing later that the recommended age.

The study was based upon parent and caregiver responses to questions on toothbrushing practices and toothpaste use among children and adolescents. The questions were included in the questionnaire component of the National Health and Nutrition Examination Survey (NHANES), an ongoing research effort designed to assess the health and nutritional status of adults and children in the United States. A total of 5,157 children and adolescents were included in the analysis.

The authors acknowledged their study had limitations: their findings were based upon parents’ self-reporting which could have been biased; that the question about the amount of toothpaste focused upon current useage and therefore might have overestimated the amount that was used at an earlier age and that the type of toothpaste (fluoridated vs. nonfluoridated) was not specified in the questionnaire.

The CDC is working with the American Academy of Pediatrics to develop a set of messages aimed at educating pregnant women and new parents about good toothbrushing practices, according to the report.