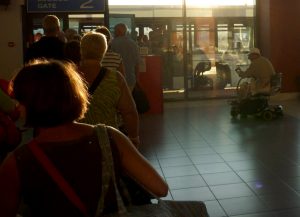 The federal government has been in partial shutdown mode since Dec. 21 – meaning it’s been nearly a full month since a quarter of government agencies, including the Departments of State, Justice, Transportation, Agriculture, and Interior furloughed a combined 800,000 workers or asked them to work without pay. What began as a minor inconvenience for some is fast becoming a major concern for many seniors who rely on government support for food, shelter and medical care.

First, the good news: Social Security, Medicare, and Medicaid will continue operating uninterrupted, Vox reported. However, they noted “new applicants for these programs might face a wait.” The VA will also continue to operate its hospitals and clinics.

Health: The NIH, CDC, and HHS face some serious hits, Kaiser Health News reported. HHS furloughed about half of its employees. That means fewer people to monitor fraud and abuse or conduct disease prevention outreach, among many other functions.

Funding for major programs like the Affordable Care Act (as well as Medicare and Medicaid) was already approved, or the shutdown’s effect could have been much worse, according to this NPR story. Paige Winfield Cunningham wrote a great roundup in the Washington Post of how the shutdown may affect ACA benefits. NPR also pointed out that “public health efforts by Homeland Security and the EPA face serious constraints.”

The Department of Health and Human Services’ contingency plans affect the Indian Health Service, which can’t provide the majority of funds to tribes and Urban Indian Health programs, as well as many FDA programs.

The FDA has sharply curtailed food and drug inspections, although some workers will return (without pay) to monitor high-risk facilities. The CDC estimates that 48 million people get sick, 128,000 are hospitalized and 3,000 die each year from a foodborne illness. Older adults and people with weakened immune systems from diseases like diabetes, cancer, or HIV/AIDS are at higher risk. Nearly half of people aged 65 and older who have a lab-confirmed foodborne illness from Salmonella, Campylobacter, Listeria or E. coli are hospitalized.

Additionally, the Administration for Community Living cannot fund some nutrition, elder abuse, or long-term care services while the spending bill is still in limbo.

Bloomberg reported on January 9 that the agency was only weeks away from running out of money for new drug and medical device reviews. Stat Plus analyzed what this could mean for drug companies (subscription required). Several drugs awaiting review could potentially benefit older adults. Becker’s Hospital Review summarized key takeaways here.

Food stamps: the U.S. Department of Agriculture (USDA) has only limited funding to maintain the program without new appropriations. The Department estimates it will be able to continue providing assistance through mid-February. About one in 10 senior households rely on food stamps, known as SNAP (Supplemental Nutrition Assistance Program). As many as one in four seniors participate in some locations, according to MarketWatch.

Tara Goldshan at Vox took a deeper dive into how seniors and other vulnerable populations may be hurt. WHNT-Huntsville, Ala., found an interesting angle on this crisis by looking at how one local program helps residents.

Housing: One of the biggest impacts of the shutdown on seniors is the lack of funding from the Department of Housing and Urban Development (HUD).

“Hundreds of thousands, if not millions, of low-income seniors, people with disabilities, and families with children that receive federal rental assistance face severe hardship if the government shutdown extends into February and March,” writes Doug Rice, a senior analyst at the Center for Budget and Policy Priorities.

According to this story from CityLab, some 75,000-80,000 low-income households that rely on HUD programs are affected. Many are seniors or disabled.  HUD cannot renew up to 1,150 rental assistance contracts that expired in December or will expire in January because of the funding shortfall.

The Campaign for Housing and Community Development Funding (CHCDF), part of the National Low Housing Coalition published a fact sheet on how seniors and other low-income beneficiaries are impacted. This piece from NBC News is a good example of how to localize a shutdown-related senior housing story.

TSA: Many older adults from colder climates head south this time of year (ever seen the pre-boarding queue for a flight from LaGuardia to Miami? We’ve all heard about the long lines, hours of waiting, and TSA employee sick-outs. Fewer staff at security checkpoints force older adults, many with mobility or balance issues, to stand for much longer than usual.

This roundup encompasses only a small portion of the programs and services throughout the federal government that are affected by the partial shutdown. There are dozens of opportunities for local stories — from an upsurge in older customers at food banks to people who may lose their homes due to expired HUD contracts, to local contractors unable to provide community-based long term services.

Reporters can localize coverage by checking with their local area agency on aging, city or state office on aging, or connecting with service providers and community program heads to find out how older adults in your community are affected, and what is being done to help them.