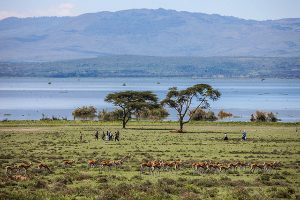 Could another seemingly obscure mosquito-borne disease that formerly existed mostly in Africa spread around the globe like the Zika virus?

Scientists say climate change increases that risk. With warming temperatures, mosquitoes carrying diseases are more abundant and are spreading to farther regions of the world. For journalists looking for stories about climate change and public health, infectious disease is a rich area for exploration.

Check out the work of researcher Amy Hartman, assistant professor at the University of Pittsburgh Center for Vaccine Research, who is studying a disease carried by mosquitoes known as Rift Valley fever.

“Zika caught much of the scientific community off guard, so we are trying to get ahead of the curve and learn what we can about Rift Valley fever,” said Hartman, who co-authored a December 2018 study on the virus’s ability to pass between pregnant rodents and their babies. “There is a lot that is unknown in the field” about the pathogen’s impact on the human body.

Rift Valley fever is named for a large geographic area in southeast Africa, where veterinarians first discovered the disease among livestock in Kenya. It often causes fetal death among domesticated animals, such as cattle, sheep, goats and camels. The pathogen is spread by the Aedes and Culex mosquitos and has spread throughout much of Africa, Madagascar, Saudi Arabia and Yemen.

Aedes mosquitos carry Zika, while the Culex mosquito carries West Nile disease. Both of these mosquito-borne diseases have been found in the U.S.

In Africa and the Middle East, Rift Valley fever has caused significant economic and trade disruptions in agriculture. An increasing number of people have been infected too. At least 183 people in Saudi Arabia, Yemen and African countries died from Rift Valley fever between 2000 and 2016, and hundreds of others have become ill, according to the U.S. Centers for Disease Control and Prevention. Most of those who became sick were individuals who worked with infected animals.

In 2015, the World Health Organization named Rift Valley fever as one of eight of the most threatening pathogens in the world (Zika also made the list) because they could cause a public health emergency and there are few medical countermeasures to treat the disease. The WHO identified Rift Valley and Zika as diseases that should be research priorities to spur investment in medical treatments and vaccines. There is no vaccine for Rift Valley fever.

Zika was declared a public health emergency in 2016 after it spread from Africa to the South Pacific to South America, Central America, the Caribbean and the U.S. The Zika virus can cause severe fetal anomalies and miscarriages in pregnant women. Rift Valley also causes miscarriage and death of young livestock.

“With the recent attention on Zika [and its impact on a fetus], we felt this was an important area to study,” Hartman said. “It is one that scientists hadn’t really looked at [with] Rift Valley before.”

Hartman’s team studied the Rift Valley fever virus in pregnant rats and found that the pathogen was able to evade the placenta’s defense mechanisms and damage the fetus.

“One of the most surprising things [we learned], was that the mothers had no clinical signs of disease and delivered their pups on time, but they were stillborn or died soon after,” Hartman said. “The biggest lesson for this study is that this virus has the [potential] to cause severe effects in people. When Rift Valley fever happens, pregnant women should be monitored closely.”

For reporters who are interested in learning more about how researchers are preparing for climate change and infectious diseases, consider looking into studies, like Hartman’s, focused on mosquito-borne illnesses.