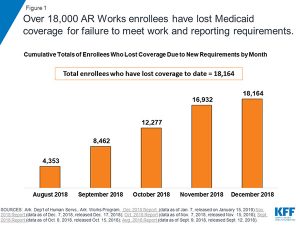 Benjamin Hardy, a reporter with the Arkansas Nonprofit  News Network and a 2018 AHCJ Health Care Performance Reporting Fellow,  has just written a How I Did It essay on his coverage of Medicaid work requirements in Arkansas.

While seven states have received CMS approval of work requirements, Arkansas is the first to put them in effect.  The rest are either being challenged in court, or in the implementation phase – or in question as a Democratic governor succeeds a Republican one. Several more states – eight, by my latest count – have requests pending before CMS and that number could grow.

Arkansas has gotten a lot of criticism, too, because of its cumbersome work-reporting requirements. Some people losing coverage are actually working – they just haven’t been able to report their hours to officials correctly. The state, having kicked about 17,000 poor people off Medicaid in the first four months of reporting rules, is making some modifications now including allowing some phone reporting and we’ll see if it makes a difference.  (See the state announcement here.)

Hardy describes both the kind of documentation and government materials he used to dig into the Arkansas program, as well as his efforts – which met with mixed success – to meet “real” people facing these requirements and get their stories.  His experiences are useful – work requirements are spreading, and the Trump administration is also tightening them for programs like food stamps.

To learn more about the Arkansas program, here is Hardy’s How I Did It piece and some extra resources and stories.