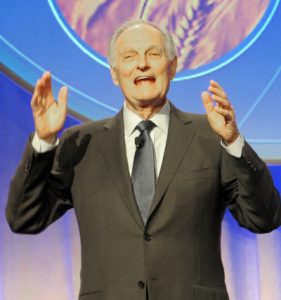 Parkinson’s disease (PD) can be a devastating diagnosis, but most people can lead full, active lives for many years thanks to medications that can control common symptoms, as well as surgical options, speech and physical therapy and lifestyle changes.

Actor Alan Alda, 82, recently revealed he had the condition during an appearance on CBS This Morning. He’s one of about 60,000 people in the U.S. diagnosed with PD each year. More than 10 million people worldwide are living with this progressive neurological disorder, according to the Parkinson’s Disease Foundation. There is no cure.

Alda said he’s not slowing down any time soon but went public because he noticed some telltale signs of the condition while watching a video of himself and wanted to control the narrative. Alda said he doesn’t want to be immobilized by fear at this stage, although he’s fully aware that symptoms can get “really bad for some people,” The Washington Post reported.

As this new AHCJ tip sheet explains, the prevalence of PD rises with age. A study conducted by the Parkinson’s Foundation projects that nearly 1 million people will be living with the disease in the U.S. by 2020. While it primarily affects adults over age 50, some people, like actor Michael J. Fox, develop an early-onset form. Fox went public with his condition in 1998, about seven years after diagnosis. You’re probably familiar with The Michael J. Fox Foundation for Parkinson’s Research, launched that same year.

There’s no one test to diagnose Parkinson’s. It’s usually identified by a neurologist, based on medical history, physical exam and symptoms. Traditional brain imaging with CT and MRI scans do not show changes in the brain when someone has Parkinson’s disease and are generally not helpful in diagnosis, according to Amie Peterson, M.D., who is an assistant professor of neurology at the Oregon Health & Science University Parkinson Center and the OHSU Brain Institute.

A specific type of brain scan, called a DAT scan, can augment assessment by measuring the brain’s dopamine levels. The test isn’t always necessary, especially with the presence of other physical symptoms. Reporters who are interested in pricing out the cost of such a scan may want to start with this 2011 fact sheet from GE, the equipment manufacturer.

The specific cause of PD is unknown; however, researchers believe that it’s caused by a combination of genetics and environmental exposure in most individuals, according to the University of Rochester Medical Center, New York. Experts believe the symptoms are related to a chemical imbalance in the brain caused by brain cell death.

The Parkinson’s Foundation estimates the combined direct and indirect cost of Parkinson’s, including treatment, social security payments and lost income, is nearly $25 billion annually in the U.S. Medications can cost an average of $2,500 a year and therapeutic surgery can cost up to $100,000 per person. Researchers continue to search for biomarkers that can accurately identify the disease or its progression.

Editor’s note: This post has been updated to correct the name of Oregon Health & Science University.