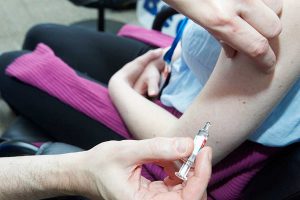 As summer ebbs, influenza season is around the corner. Public health officials are beginning their annual campaign to urge people to get a flu shot long before cases begin to peak in January or February.

So what’s new for journalists to write about this year? Take a look at what happened last flu season and at some new data showing that flu vaccination may also reduce the chances of heart attacks and stroke, especially in those 65 or older.

Last season was a severe one. More than 30,400 people (mostly 65 and older) were hospitalized due to the flu and at least 180 children died, the most since the 2009 swine flu pandemic. About 80 percent of the children who died in 2017-18 hadn’t gotten a flu shot. Reporters can check what happened in their state by reviewing CDC state-by-state data.

In 2017, Australia and other southern hemisphere countries had a terrible flu season, followed by a severe season in the United States. But this year, the southern hemisphere “had, relatively speaking, quite a mild season,” said William Schaffner, M.D., professor of infectious diseases at Vanderbilt University Medical Center and medical director of the National Foundation for Infectious Diseases.

For that reason, the CDC recommends everyone over the age of 6 months get an annual flu shot. In general, only about half of Americans usually get a flu shot. One reason people give for not getting a shot is its effectiveness, since a flu shot won’t provide 100 percent protection. But while people can still get the flu despite having been vaccinated, doctors emphasize that those patients tend to have less severe symptoms and recover more quickly.

For the 2017-18 season, the northern hemisphere flu shot was overall about 40 percent effective — so someone who got a flu shot had about a 40 percent lower likelihood of getting so sick from the flu that they had to seek medical attention.

“I say to people, why gamble with the flu?” said Litjen (L.J.) Tan, chief strategy officer for the Immunization Action Coalition, a nonprofit that works to increase immunization rates. “Especially if you are older and you get the flu, you could end up with a walker. So why not get the flu vaccine?”

For this flu season, Tan and Schaffner said they plan to emphasize that not only does a flu shot reduce the risk that someone will become very sick from the flu, but a shot can also prevent people (particularly those 65 and older) from having a heart attack or stroke. [Schaffner disclosed that he is on a data safety monitoring committee for drug company Pfizer but doesn’t oversee any monitoring of the safety of the flu vaccine.]

“What is new about the flu?” Schaffner said. “Well, there is gathering data that influenza … induces a systemic inflammatory response [which] persists for two to four weeks [even after flu recovery] and that [inflammatory response] can go to the heart and brain, increasing the risk of heart attack and stroke … Doctors are just beginning to learn about this, and when I give my talk about [this], they sit up in their chair.”

Schaffner points to four recent studies, including one in the June 2018 issue of the journal Clinical Infectious Diseases, which show strong “associations” between the development of respiratory infections (especially influenza) and heart attacks or strokes.

“Flu is even more dangerous than we thought before,” said Schaffner, who plans to join CDC officials at the National Press Club in Washington, D.C., on Sept. 27 for the agency’s annual briefing on the upcoming flu season.