Based in Washington, D.C., Chew covers health care policy for a variety of media outlets. She has been published in Stat News, Politico, Provider Magazine, Modern Healthcare and BloombergBNA.

View all posts by Cassie Chew → 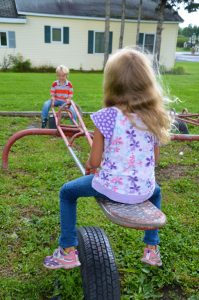 Many young women in recent weeks have walked across a stage in cap and gown to accept their hard-earned high school diplomas. But recent research says the transition into adulthood comes with quickly forgetting lessons from their physical education classes.

Recent data analysis of findings from a long-running health study finds that women in their late teens and 20s are less physically active than their male counterparts, failing to meet minimum recommendations for exercise.

Across all demographics of people aged 12 to 29 years, young women reported lower physical activity than males. “Females were significantly less likely to start or sustain physical activity than were males,” Duke University researchers wrote in a recent JAMA Pediatrics article. “This association persisted across all race/ethnicity and income groups and as participants aged from adolescence to adulthood.”

Almost three-quarters of white males between 18 and 29 reported moderate or vigorous physical activity, compared with about two-thirds of white women, about half of Hispanic females and 45 percent of black women in the same age category.

Researchers arrived at these numbers after analyzing responses of almost 9,500 young people who participated in the National Health and Nutrition Examination Survey between 2007 through 2016.

In the NHANES survey, respondents were asked these two questions:

The Centers for Disease Control and Prevention recommends an hour of physical activity per day — seven hours a week — for people between ages 10 and 19, including aerobics, muscle and bone strengthening activities at least three days a week. However, according to the Duke University research, only 27 percent of high school students reach these guidelines.

Physical activity among youths may actually start to decline in elementary school. The increase in emphasis on test scores in recent years may result in educators placing a greater priority on classroom time over recess, according to the Council on State Governments.

Policy on physical activity in elementary schools varies among states, with several states requiring at least 20 minutes of recess per day.

Thirty-nine states have formal laws requiring physical education. Nineteen states specify time limits that students must participate in physical education, but more than half of them allow substitutions that release students from the requirement, CGS wrote in a 2017 policy brief.

For people age 20 and older, CDC recommends a minimum of 2½ hours of moderate intensity activity per week. But, one-third of adults aren’t meeting these guidelines, according to Duke University researchers.

For more extensive health benefits, CDC recommends five hours of weekly moderate exercise for adults. In the Duke University analysis, males between 25 and 29 reported an overall 50 minutes of activity per day compared with females reporting an overall 39 minutes per day.

Black women in this age group reported the shortest duration of activity, with about 33 minutes per day compared with white and Hispanic women in the same age group who reported 39 and 44 minutes of activity per day, respectively.

Overall, the study found disparities in the likelihood to engage in the recommended amount of physical activity based on gender, race and income.

“Females, racial/ethnic minorities, and those living in poverty remained most likely to be inactive,” researchers wrote.

With physical activity in youth linked to decreased risk of obesity, diabetes, cancer and heart disease, the Duke University researchers hope understanding the prevalence and factors of moderate to vigorous physical activity in adolescents and young adults will guide public health and policy efforts.

Based in Washington, D.C., Chew covers health care policy for a variety of media outlets. She has been published in Stat News, Politico, Provider Magazine, Modern Healthcare and BloombergBNA.