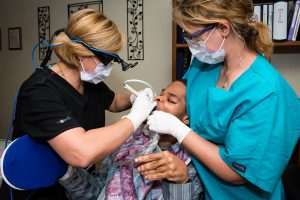 In stories for California Healthline, Ana B. Ibarra has been following a battle being waged by a cadre of independent practice dental hygienists who claim that state actions are forcing them to give up their most vulnerable patients.

At a residential care facility in Rancho Cucamonga last year, Ibarra described one of those hygienists at work.

Gita Aminloo was singing “Itsy Bitsy Spider,” the classic children’s song, to calm 42-year-old Devon Rising, who is blind and mentally disabled, so she could finish cleaning his teeth.

Such visits by California’s independent, mobile practice hygienists have helped patients that are institutionalized, aged or have disabilities get the care they might otherwise go without, Ibarra explained.

“But this might be the last time Aminloo cleans Rising’s teeth,” Ibarra noted in a December story.

“Hygienists say that some of their patients are no longer getting the critical dental care they need because of recent policy changes: The state dramatically slashed payment to providers and created a preauthorization process they call cumbersome,” Ibarra wrote.

The dental hygienists contend that a 2016 decision by Denti-Cal to cut the rate for a common cleaning procedure for fragile patients from $130 to $55 has made it difficult for them to afford to continue make their rounds. They also claim that under the new preauthorization requirements, more than half of their requests to perform procedures have been rejected.

“Denti-Cal’s sweeping new rules are destroying the lives of fragile patients and the women who own small businesses providing care at the bedside,” wrote the California Dental Hygienists’ Association in a letter to the state legislature.

The state Department of Health Care Services, which runs Denti-Cal, has defended the changes saying they were imposed to bring the program’s reimbursement rates in line with other states and to reduce “unnecessary dental treatment,” Ibarra wrote. The state challenged the hygienists’ claims of high denial rates for services.

But in a lawsuit filed in Los Angeles County Superior Court, Aminloo and seven other dental hygienists argued the changes made by the state were imposed without the necessary federal approval.

In a March 2 story, Ibarra provided readers with an update on the hygienists’ case.

Los Angeles Superior Court Judge Mary Strobel ruled that the state had failed to obtain permission from the federal government before it cut its rate for a special cleaning by 58 percent and created a new preauthorization process for the hygienists’ services, Ibarra wrote.

Court documents showed that the number of cleanings performed by independent hygienists fell 45 percent, from 70,671 in the 19 months before the new policy took effect to 38,915 in the 19 months that followed.

The hygienists’ reaction to the ruling was guarded. They told California Healthline that they were worried that the issue would remain tied up in court for months or even years.

Aminloo said she had stopped seeing her patients at the Rancho Cucamonga facility because none of them had received approval for continued dental work.

“It breaks my heart but I am doing what I can,” Aminloo said. She said she was looking for private pay patients in senior and memory care facilities to make up for her lost Denti-Cal patients.

“I just hope that by the time all of this is resolved, we’re still in business, Aminloo said.

Stay tuned for a Q&A with Ibarra about her reporting on this story and an update on the situation.