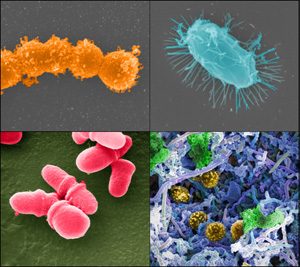 In fact, the scientific evidence is still so scant, probiotics sold on the market, like Culturelle, are probably not as beneficial as advertised, two scientists who spoke at AHCJ’s annual conference said.

“In healthy people, I don’t really recommend a probiotic,” John DiBaise, M.D., and professor at the Mayo Clinic–Phoenix, said in answer to a question about whether probiotics were worth the money.

The number of published scientific research papers on the microbiome has jumped from around a few hundred in 2008 to more than 10,000 by the end of 2017, making it one of the hottest news topics in the science of health. Driving that growth has been the 2007 launch of the Human Microbiome Project by the National Institutes of Health.

Early research results have spawned lots of commercial ventures, like the sale of probiotics and offers to sequence the genome of individuals, but they have almost no science to back up their claims, said DiBaise and McDonald.

DiBaise told journalists that while research is promising, most of it has been conducted on mice and “mice aren’t humans. We need to keep reminding people of that. Right now, what we are seeing is associations” but not direct evidence of cause. He also underscored that he believes microbes may be only one part of the story behind weight gain or loss and inflammatory diseases in the gut.

McDonald concurred and said that early research indicates diet doesn’t have a dramatic impact on the composition of the microbiome. Vegetarians, for example, have a similar microbiome to omnivores. McDonald directs research at American Gut, one of the largest existing crowd-sourced studies on the microbiome. Located at the University of California-San Diego, American Gut is collecting fecal samples from around the world and studying them.

The one area of microbiome research where there is clear evidence is connected to the use of fecal transplants to treat reoccurring illness from Clostridium difficile. C. diff is a bacteria that causes symptoms from diarrhea to life-threatening inflammation of the colon. The evidence clearly indicates that around 90 percent of people with severe C. diff can be healed if they receive a fecal transplant from someone healthy. The Infectious Diseases Society of America recently issued guidelines to physicians on fecal transplants suggesting it has become a mainstream treatment for C. diff.

“But doing a DIY fecal transplant is not a good idea,” said McDonald. “We don’t recommend people trying to do this at home themselves.”