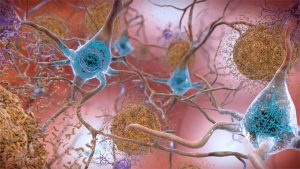 For the first time, scientists have found a connection between abnormalities in how the brain breaks down glucose and the severity of the signature amyloid plaques and tangles in the brain, as well as the onset of eventual outward symptoms of Alzheimer’s disease.

Lower rates of glycolysis and higher brain glucose levels correlated to more severe plaques and tangles found in the brains of people with the disease. More severe reductions in brain glycolysis were also related to common symptoms of Alzheimer’s disease during life, such as problems with memory.

Researchers have thought about the possible links between how the brain processes glucose and Alzheimer’s for some time, according to NIA Director Richard J. Hodes, M.D. This type of research can help scientists think about new ways to investigate these connections as they search for better and more effective ways to treat or prevent this disease.

Brain tissue samples at autopsy from participants in the Baltimore Longitudinal Study of Aging  (BLSA), were analyzed. The BLSA is one of the world’s longest-running scientific studies of human aging, tracking neurological, physical and psychological data on participants over several decades. Researchers measured glucose levels in different brain regions, some vulnerable to Alzheimer’s disease, such as the frontal and temporal cortex, and some that are resistant, like the cerebellum.

Similarities between diabetes and Alzheimer’s have been difficult to evaluate, since insulin is not needed for glucose to enter the brain or to get into neurons, according to principal investigator Madhav Thambisetty, M.D., Ph.D., chief of the Unit of Clinical and Translational Neuroscience in the NIA’s Laboratory of Behavioral Neuroscience. However, the team was able to determine that enzymes controlling the brains use of glucose were lower in Alzheimer’s cases compared to normal brain tissue samples. Additionally, lower enzyme activity was associated with more severe Alzheimer’s disease in the brain and the development of symptoms.

Thambisetty cautioned that it is not yet completely clear whether abnormalities in brain glucose metabolism are definitively linked to the severity of Alzheimer’s disease symptoms or the speed of disease progression. It’s also important to remember that correlation does not equal causation. However, this study further supports the theory that glucose impacts development and severity of Alzheimer’s. The study appears in the Nov. 6, 2017, issue of Alzheimer’s & Dementia: the Journal of the Alzheimer’s Association

According to the Alzheimer’s Association, more than 5 million people in the U.S. are living with Alzheimer’s disease and other dementias, costing an estimated $259 billion. By 2050, there could be as many as 16 million people in the U.S. with the disease, at a cost of $1.1 trillion. More than 15 million caregivers provide an estimated 18.2 billion unpaid care hours for those with the disease in 2016.