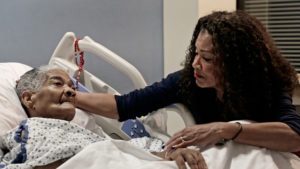 You wouldn’t necessarily expect a documentary about end-of-life issues to be uplifting. But at the premiere of a new film about the topic, the audience smiled and laughed. At other times, they fought back tears. Many mentioned a resolve to start talking about their wishes and goals.

Defining Hope is a sensitive, smart film about a tough topic, that makes you think. It asks, what is it I hope for from the rest of my life, no matter how long or short? It’s a difficult, but necessary discussion that all too often is put off, until it’s too late.

Why make a film about dying when there are so many other, happier topics? Death is 100 percent unavoidable and it’s something we all need to talk about, according to the film’s director, Carolyn Jones.

The film tracks the lives and aspirations of patients ranging in ages 11 to 95, with life-threatening illnesses. We are in the room as they and their families struggle with how they wanted to live, what medical technology to accept and their evolving goals. We also meet the nurses who care for these end-stage patients, including one who must contend with her own difficult diagnosis.

“The film is less about death than it is about what makes life worth living,” Jones said by phone. And, it’s about the importance of others knowing how you want to be cared for at life’s end. “It helps us define what quality of life really means,” she said.

While working on another film project, Jones said she heard time and again from nurses who told her that “we’re not dying very well.” She wanted to dig into that topic and how technological advances have made life so much more complicated at the end of life.

“It didn’t feel like a dark topic,” she said. “I knew enough to realize there was also great joy in it, and that it would be a powerful journey.” A major goal of the film was to normalize the conversation around death as much as possible.

Yet those discussions still are not happening enough, according to a new report from the Kaiser Family Foundation. While people are living longer, and with more chronic diseases than ever before, many people report that they have not taken steps to plan for issues if they become seriously ill. KFF conducted a nationally representative telephone survey of 2,040 adults, including 998 who are either age 65 or older living with a serious illness, or have a family member who is, or who recently died.

Only about half of respondents (54 percent) said they have talked with loved ones about their wishes for medical care in case of serious illness. Others said they have put off discussions for many reasons, including not wanting to think about sickness and death (56 percent).

Although most said they understood the importance of putting their wishes in writing, only a third (34 percent) had documented the care they wanted to receive in case of serious illness. About 40 percent said they had named a health care proxy.

Additionally, only 18 percent have talked with a doctor or other health care provider about their wishes, regardless of health status. Even among those with written documents, only 30 percent had shared them with a health provider, “leaving open the potential for uncertainty or confusion about what a person would want if seriously ill, even though they have gone to the effort of documenting their wishes,” according to the report.

Americans in particular, still seem to have great difficulty talking about end of life issues. “There are certain taboo areas in our culture. Death has been one of them,” said Barbara Jonas, M.S.W., F.A.A.N.(h), F.A.A.N.P.(h), founder, Jonas Center for Nursing and Veterans Healthcare and one of the film’s sponsors.

“It’s a very personal kind of voyage, but movies, along with books and art, can illuminate our path,” she said in a phone interview. It takes time to sort things through, she added. End-of-life isn’t a one-time discussion.

November is Hospice and Palliative Care month, so it’s a good time for people to begin the conversation with their loved ones. Coincidentally, this year’s theme is “it’s about how you live.”

Screenings of Defining Hope are planned throughout the U.S. during November. Many of these events include opportunities for community showings and discussions with local hospice experts. Jones is negotiating to air the film on cable television in 2018.

Journalists: for more on hospice and palliative care, check out these resources