Laura Laing is a freelance journalist and essayist, as well as the author of three books: "Math for Grownups," "Math for Writers," and "Your Daily Math." A student in Goucher College’s MFA program in creative nonfiction, she is currently writing a non-traditional memoir with mathematical themes.

View all posts by Laura Laing → 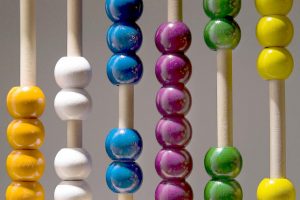 Ah, the precision of numbers! For editors and journalists alike, the right number can slam a story into high gear, giving it a clear message: this is why you should care.

Reporting the numbers gives a story its footing, and for a good reason. As the queen of the sciences, mathematics pulls the abstract down to the ground, where it can be applied to everyday life. That can include the optimal number of calories we should eat each day, the most effective dose of melatonin that guarantees a good night’s sleep or the time it takes measles to spread among a community with non-immunized children and adults. Math is the language of science, and so without numbers, science would be flimsy, inapplicable. We wouldn’t know the rules or when it’s appropriate to break or bend them.

Remarkably, numbers also impart strong emotion. They make us feel hopeful, compassionate, worried, angry. For us journalists, numbers may offer a sense of security. When we have got the number—the bottom line—we have got the story. The number goes in the subhead, the nut graf, the pull-quote and the sidebar. Especially in health journalism, numbers are solid bits of evidence that readers can count on.

The problem is that numbers never tell the whole story. What’s worse is when nuance is sacrificed in favor of a nice, neat number. This isn’t always the fault of the journalist (or the editor). As a culture, we are groomed to recognize numbers as immutable facts. Fake news aside, this isn’t an inherently bad conclusion. Still, a total, average, midpoint, percentage or distance is only one element of the whole story.

An example: My weight is a number, a fact about which I can’t argue. But that one number means very little unless you know some others: my age, my height, my caloric intake, my BMI, my mother’s and grandmothers’ weight at my current age. There also are some non-numbers that help fill in the blanks: my health history, my exercise regimen, my diet, my family’s health history, my history with dieting, the medications I am taking. These other facts put my weight in context.

Numbers without context are meaningless. A 50 percent decrease in the total number of HIV infections in a particular population is less impressive if the original population were two people, rather than thousands or millions. This is Journalism 101, but the PR departments of universities and other research centers don’t always help us spot the potential problems in the numbers they give us. Worse, funders and sometimes the scientists themselves are less than ethical in reporting their numerical results. They count on our trust of the numbers. And when the science gets difficult to understand, we might not dig deeply enough for context.

None of us want to be trapped in a love affair with meaningless numbers. Numbers won’t love you back, and they won’t give you the sense of security you crave.

The solution is simple: resist the lure of numbers. Question anything that seems too good to be true. Don’t expect the numbers to speak for themselves, because they never, ever do. Whenever you can, illustrate your thesis with a good, solid number from reputable research, but don’t forget its context. Check your math, and when possible, check the math of the researchers.

Science and math are messy. Conclusions are rarely iron clad. There will be new studies that disprove or refine the previous one. Truth is vast, and facts are dependent on specific contexts. At the same time, we have voracious appetites for the concrete, the provable, the bottom line. But as purveyors of truth, our greatest tool is nuance, not numbers. Numbers can help us draw a recognizable shape around nuance. In that way, numbers are instruments, not answers.

Journalism with a stronger background in writing or English than science may feel intimidated if a story involves statistics or other numbers, believing math “just isn’t their thing.” But never fear! Many organizations and websites exist to help journalists needing a crash course in math. Check out this new tip sheet on resources by Tara Haelle, AHCJ’s medical studies core topic leader.