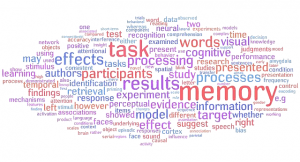 Photo by Ethan.frain, via Wikimedia Commons

During a recent AHCJ webinar, a guest speaker discussed problems he sees in media reporting on addiction, including terminology that promotes stigma, misunderstanding and misconceptions about the disease. Language can be powerful and potentially damaging in many areas of medicine, but particularly in mental health. Journalists need to be wary of more than negative or stigmatizing language. They may be better off avoiding certain frequently misunderstood terms and more carefully choose words that are more precise and accurate.

A helpful article by Scott Lilienfeld of Emory University’s Department of Psychology in Atlanta and some colleagues addresses the latter point. The piece, “Fifty psychological and psychiatric terms to avoid: a list of inaccurate, misleading, misused, ambiguous and logically confused words and phrases,” is open access at Frontiers in Psychology, so journalists can download for their reference. The paper is aimed primarily at students and teachers in psychology and psychiatry, but can be useful for journalists as well, especially if they are covering medical research in mental health.

Ironically, the title of the article itself can be a bit misleading since it suggests that the expressions highlighted should always be avoided. While several (such as “love molecule,” “truth serum” and “god spot”) don’t belong in any serious story, others are common terms: “antidepressant medication,” “chemical imbalance,” “gold standard” or “the scientific method.”

Lilienfeld and company do not necessarily suggest these terms never be used, but argue that they often are used too frequently and imprecisely. They detail how and when these terms should be used.

Now for journalists, those recommended replacements are potentially misleading for a lay audience who may not realize that “significant” here refers to statistical significance. Though wordier, it may be better for us to say “the small difference between the groups was not statistically significant” or “the small difference in groups could have been due to chance,” or another variation.

The Frontiers in Psychology paper also may alert journalists to some red flags in study they are reviewing. For example, the phrase “reliable and valid,” appears in more than 190,000 manuscripts in Google Scholar but its use can be problematic in three ways:

A journalist who comes across such phrases in a scientific paper is better armed to question it.

Remember this Frontiers in Psychology paper is aimed at students, professors and researchers, so journalists may need to adapt the suggestions to their audiences. The terms are organized under these subheads: “inaccurate or misleading terms,” “frequently misused terms,” “ambiguous terms,” “oxymorons” (“scientific proof” is my favorite under that one) and “pleonasms” (which is the use of more words than necessary to convey an idea).