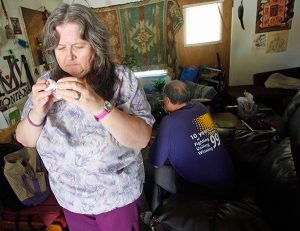 Shefali Luthra knows that too often press releases landing in a journalist’s inbox often go nowhere. But working with her editor, the Kaiser Health News (KHN) reporter turned that standard media outreach into a humanizing look at how current health reform efforts may affect home health care workers, who themselves often struggle for care and coverage.

Luthra reached out to various groups to find workers willing to talk about how the 2010 Affordable Care Act affected them – and how Republican efforts to dismantle the law could impact their own health.

The piece, “Workers Who Give Care To The Homebound Often Can’t Afford To Get Their Own,” ran this spring on KHN’s website as well as on National Public Radio. It helped highlight the issue of low wages and lack of insurance common for such workers.

“Like many others who work in the lower rungs of the health care system, (home health aides work hard to keep) clients healthy by feeding them, dressing them and helping them navigate chronic conditions,” Luthra wrote, noting:

“But because of the low wages and the hourly structure of this industry — which analysts estimate is worth nearly $100 billion annually and projected to grow rapidly — workers … often don’t have health insurance. Many home health agencies, 80 percent of which are for-profit, don’t offer coverage, or their employees don’t consistently clock enough hours to be eligible. They generally earn too much to qualify for public aid but too little to afford the cost of premiums.”

Luthra, whose work for KHN focuses on access to care and public health issues, has taken the same approach to some other stories, trying to peel back the driving forces affecting other aspects of care not often covered. Some of her other stories have explored the impact of federal housing dollars on health, charity care for nonprofit hospitals, opioids and Medicaid coverage.

Check out Luthra’s new “How I Did It” for AHCJ about how she covered the health care issues of home health care workers.