Erin Mershon covers the politics and policy of health care for Stat in Washington, D.C. She's written extensively on those and other policymaking issues for national news outlets. Through an AHCJ Reporting Fellowship on Health Care Performance she is reporting on health insurance challenges in rural areas across the U.S.

View all posts by Erin Mershon → 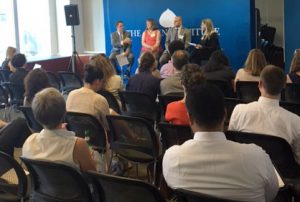 A panel of Altarum Institute experts dove into the politics and policy of broad topics in public health, including the untold stories of the opioid crisis, persistent but overlooked concerns over long-term care funding and the importance of access to dental services.

The opioid crisis continues to escalate and, despite widespread coverage of the challenges across the country, there are new and important angles to the story, suggested Tom Coderre, a senior adviser at the D.C.-based research and consulting organization, during a June meeting of the AHCJ’s Washington, D.C., chapter, hosted by the Aspen Institute.

He pointed to lingering challenges with training and educating law enforcement and the public about addiction as well as treatment options.

“When somebody is administered naloxone, they go into immediate withdrawal,” he said, referring to the drug used to treat an opioid overdose. “What you need to have is that person then handed off. …. We haven’t seen enough of this happen around the country.”

He suggested there were model programs in some states, such as Rhode Island, starting to address the recovery challenge with coaches who better understand recovery.

Coderre also pointed out that in some cases, one dose of naloxone might not be enough to reverse an overdose. The naloxone could wear off before the other drugs in a person’s system – which could dramatically affect how they interact with whomever administered the medicine, he said.

“This is part of the education piece, especially when naloxone is in the hands of community members or the police force,” he said.

“It used to be that you’d have a whole bevy of people who could take grandma in. [Now], the idea that the family is all set up to take care of grandma is really not going to work,” she said.

“If we wait to even get around to notice it we are guaranteed to have to walk out on people and leave them without services, food, housing, medical care,” she continued. “Or we will have to really break the bank and ruin the economy. Those are pretty stark choices. But we don’t have a political sensibility that plans 20 years out.”

She suggested reporters could find countless stories from people frustrated with how their loved one was cared for at the end of life, simply by scanning the obituary page and calling families. She gave examples of poor coordination between Medicare and Medicaid, as well as some spots of hope, like the small but effective PACE programs in some parts of the country.

“We know what works. We just don’t have any way to sustain what works,” she said.

In the final presentation, Altarum’s Greg Makris shared a more optimistic story about program from the nonprofit, SmileConnect, that aims to improve access to dental health services.

“I don’t think they understood as much, even 15 or 20 years ago, how much teeth affected your overall health, and how big a link, how close a link there was to overall health,” he said.