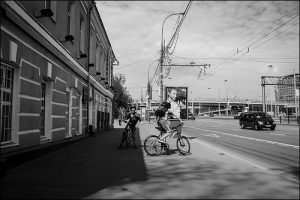 Amid growing awareness about “ZIP code” health disparities, some struggling areas are trying new ways to reinvent their communities and move residents toward better health and wellness.

Some of these projects involve health experts and housing developers to help get local officials out of their silos and into multi-sector projects that will overhaul poorer urban neighborhoods, where maintaining good health can be challenging, two such experts told AHCJ members during a recent webcast.

The approach involves physicians, health advocates, community organizers and developers working together. They form organizations to reimagine how their communities are intertwined. Various initiatives seek to improve housing, infrastructure and schools to remove roadblocks to optimum health, they said during the May event.

These overhauls can employ several administrative formats, they said, but the idea is to bring better access to grocery stories, mixed-income housing, community centers, fitness facilities and parks, and educational support services that will help improve people’s lives – and health.

Dr. Doug Jutte, a pediatrician who leads Build Healthy Places Network (a national organization that focuses on such cross-sector community work), said he was drawn to such an approach after seeing the limitations of his medical training once he began treating patients after medical school.

“I could do their shots, I could check for lead levels – but a lot of what was going on was well beyond what I had been trained to actually deal with,” said Jutte, who also is a University of California professor. “What I learned was that health is not healthcare … health doesn’t mostly come from medical care… health care is really sick care.”

Purpose Built Communities president Carol Naughton, whose nonprofit consulting firm aims to transform poor, urban neighborhoods, said her work as a developer evolved over the years as she became more aware about the impact of people’s living circumstances on their health.

“By building healthy places, healthy neighborhoods that include deep, durable pathways out of poverty for low-income families, we improve health outcomes at the same time,” Naughton told webcast participants.

Naughton’s group works with city leaders to redevelop small, neighborhood-sized areas to revitalize them through schools, housing and health and wellness infrastructure, she said. Financing mostly comes from public-private partnerships.

So far, her group has 16 network members, while another 35 areas are considering joining, she said. Her group estimates as many as 825 “highly distressed” U.S. metro-area neighborhoods could benefit from such changes in states of all political stripes.

In one neighborhood that underwent such redevelopment, East Lake Meadows in the Atlanta area, has seen private investment gains, housing price increases, additional retail options and higher incomes for families there, Naughton said.

More details on how such programs work and are funded can be learned by listening to the archived webcast.

Are you writing about communities that are attempting to change to improve health? Send us your stories at determinants@healthjournalism.org.