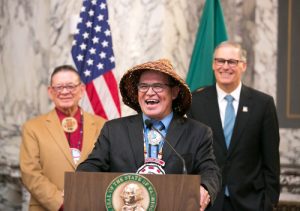 Photo: Legislative Support ServicesBrian Cladoosby, president of the National Congress of American Indians and chairman of the Swinomish Indian Tribal Community, speaks at the February 22 bill signing for Washington state’s SB 5079 which increases access to affordable dental care. Behind him are Sen. John McCoy, left, and Gov. Jay Inslee, right.

In recent months, Hoekstra has focused on the legal angle to examine the dental therapist debate now roiling in statehouses across the country.

Dental therapists often are compared to nurse practitioners in the medical world. Trained in a narrow range of preventive and restorative procedures and employed in some countries around the globe, they have attracted supporters among U.S. oral health advocates who see the speciality as an affordable means to expand access to dental services for millions of Americans who currently lack routine care.

At the same time, the technically-trained workers have been opposed widely by state and national dentists’ groups, which contend that dental therapists lack the training to perform procedures such as drilling teeth.

In spite of the resistance, dental therapists have managed to win approval to practice in Minnesota, Maine and Vermont and in  tribal areas in Alaska and Washington state. A tribal pilot program is also getting underway in Oregon.

In other states, the battles continue.

Earlier this year in North Dakota, Hoekstra reported that the state’s dental board derided the wording of a dental therapy bill for its “unprofessional language,” then hired a lobbyist to help stop it.

In Arizona, where legislation also failed, advocates for the dental workers pledged to renew their efforts, Hoestra reported in April. So did state dental leaders who said they plan to continue to oppose the model.

The first dental therapists in the United States began working in Alaska’s tribal communities over a decade ago. Alaska Native leaders used their power of tribal sovereignty to overcome legal challenges from national and state dental groups. In Washington State this year, the Swinomish Indian Tribal Community took a lesson from Alaska to score a similar victory, Hoekstra reported.

In a recent dispatch headlined “Washington Tribe Beats Dental Lobby, Gets Dental Therapy,” she offered an examination of the Swinomish tribe’s strategy.

The tribal leaders took the bold step of hiring a dental therapist in January, knowing that legal issues still needed to be resolved.

“Since they have sovereignty, tribal communities do not need state approval for dental therapists,” Hoekstra reported. “The 2010 Affordable Care Act, however, requires state authorization to use federal funding through the Indian Health Service, which enables Medicaid reimbursement.”

The tribe addressed that challenge by using a “two-step approach” that initially involved using private funding to pay the dental therapist, while at the same time developing a licensing system and legislation to comply with state and federal reimbursement requirements, Hoekstra wrote.

Then, when the Swinomish went to state lawmakers for approval for their program, the tribe told legislators the choice was clear-cut.

“You can either choose to challenge tribal sovereignty or accept it,” Swinomish health programs administrator John Stephens explained in the story.

The legislation, which allows up to 100 percent federal funding for care provided by dental therapists, passed with little resistance, Hoekstra reported.

Now, the tribal community is celebrating its victory, she wrote: “The next steps for the Swinomish will be to double the size of the tribe’s clinic.”