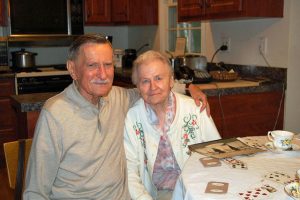 Men now make up about 40 percent of all family caregivers, but a new report says most are not reaching out for emotional support or even recognizing their role as a caregiver.

Some 16 million adult men are caring aging or ill parents or spouses, and nearly two-thirds of them (63 percent) are the primary caregiver. That is up from 34 percent just eight years ago. More than half (54 percent) say it is hard to help their loved one with certain activities of daily living (ADL) like bathing, feeding, or dressing, according to Breaking Stereotypes: Spotlight on Male Family Caregivers from AARP. Many say they have a hard time finding resources specifically tailored to their needs.

“Men are helping with medical and nursing tasks, giving injections, helping with wound care. They feel unprepared and untrained to do that,” said report author Jean Accius, PhD., who is vice president of Independent Living/Long-Term Services and Supports at the AARP Public Policy Institute.

Male caregivers are breaking stereotypes about men only handling a loved one’s finances or doing the yard work – they also are performing intimate, personal care, Accius said in a phone interview. “If you’re a son taking care of mom, you can just imagine the level of discomfort that might be there for the caregiver as well as the mom.”

Doug Bennett knows this scenario all too well. The 50-year-old former college administrator had to quit his high-profile job in San Diego and relocate to Port Ritchie, Fla., to live with his mother, now age 89. He has been the primary caregiver for the past five years, doing more and more hands-on care as her dementia worsened. Bennett can’t rely on his brothers for help, due to their own serious medical problems.

“I was the last person on earth who had the capacity to take this on,” he explained in a phone interview. “I love her but I’m pretty much exhausted. It’s a much bigger undertaking than anyone who hasn’t done it could fathom.”

Bennett said he handles “pretty much everything” for his mother now – providing constant direction and guidance at mealtime, doing all of the cooking and cleaning, helping her with toileting, hygiene, bathing, and making sure she’s wearing clean clothes. “It’s a full-time job.”

As someone who worked full time his entire adult life, he admits it was “a huge adjustment to throw on the brakes and become a full-time caregiver.” He still is struggling with that role. Bennett does not participate in any local support groups, he said, because of the difficulty in finding a backup caregiver.

To help Bennett and millions of caregivers like him, AARP rolled out a new public service ad campaign highlighting how tough it is to be a male caregiver and encouraging men to reach out for help. The Ad Council produced the spots, which feature tough guy Danny Trejo.

“Often men approach caregiving as a problem they can fix, and it’s doable,” said Accius. “Then they realize it’s harder than they thought, they can’t fix it, and they think they’ve failed. But that’s not the case.”

Like many male caregivers, Tom Mulry spent more than a decade increasing his involvement in caring for both of his in-laws in Brooklyn, N.Y. From cooking and yard work, to spending nights sleeping in a chair because his father in law would wander, Mulry found himself eventually taking on much more intimate tasks for his mother-in-law in the last few years of her life, especially after she became completely bedridden.

“It wasn’t something I necessarily wanted to do, but I was there to help and support my wife,” he said by phone. “I just had to put my feelings in a corner and go for it.”

While focusing on the specific needs of male caregivers is a good thing, Carol Levine, who is director of Families and Health Care Project at the United Hospital Fund, reminded me that men have always been caregivers to some degree, such as during the AIDS epidemic of the 1980s. “It’s just taken a long time to bring men into this arena in a focused way.”

It’s still the general perception is that caregiving is a woman’s job, or that at least they are the ones who will step up to do it, Levine said. “What this report does is give us another example of the diversity of family caregiving,”

Taking care of a spouse, rather than a parent, still is more culturally acceptable for many men, she said, noting that men feel more responsibility to do that, but still get less help.

About six in 10 male caregivers said they felt they had no choice when caring for a spouse or partner, according to the report. On average, men caring for a spouse had been doing so for 5.1 years, and helped with 2.1 activities of daily living (ADLs), compared with those who had spent 3.9 years caring for a parent and helping with 1.7 ADLs.

Caregiving is stressful for both men and women, but men say they experience additional stress while trying to balance family and work obligations. They were more likely to be working than female caregivers (66 percent vs. 55 percent) and had to make significant changes in the workplace, including taking time off, shifting to part-time employment or turning down a promotion. About 44 percent of male caregivers reported moderate to high financial strain.

Bennett said he went from making a comfortable six-figure salary to earning less than $10,000 annually doing some freelance writing. The only other income is his mother’s social security, so he often struggles to make ends meet. Applications for Medicaid are slowly winding their way through the system.

“I’m very frustrated, very angry, and very resentful,” he said. “All they do is talk about the value and importance of keeping elderly, especially people with dementia, in their homes as long as possible, and I completely agree. But it becomes an exercise in futility unless you have the resources to pay for home care out of pocket.”

The AARP’s Accius reiterated the need for a national long-term care strategy to recognize and support family caregivers. Despite the current political climate in Washington, it’s an issue that crosses party lines. “It’s an issue that warrants collaboration and partnerships across sectors and industries, that impacts the workforce and impacts communities,” she said.

One bright spot is the CARE Act, (Caregiver, Advise, Record, and Enable), which is state legislation to support family caregivers when loved ones transition from hospital to home. It is now law in 38 states, but Accius said much more needs to be done at federal, state and local levels to reduce isolation and provide services and supports that all caregivers need.

“There are waiting lists for the programs we have,” Levine noted. “There aren’t enough for the number of caregivers, and if you start cutting back the people who have been depending on them will be in trouble. And those who are just finding that they need some services will certainly have a harder time.”

Here are some issues for journalists to consider: