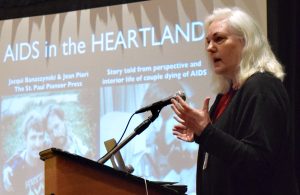 All great stories begin with great reporting. But how do you make your copy snap, crackle and pop? Use some of the same techniques found great television and movies, suggests Jacqui Banaszynski, who holds the Knight Chair in Editing at the Missouri School of Journalism.

Kicking off the morning sessions on the first day of Health Journalism 2017, Banaszynski, who won a Pulitzer Prize for her series, “AIDS in the Heartland,” kept a packed room of journalists engrossed during a nearly two-hour give-and-take on the elements of great narrative writing that engages your readers from beginning to end.

It is not always an appropriate approach, said Banaszynski, who also is a visiting faculty member at the Poynter Institute. Most of what we do as journalists is reporting, as it should be, she explained. But there are times when storytelling makes a greater impact.

Writing to readers’ preferences can be challenging, however, since readers fall into one of two camps: informational or contextual. “I’m a contextual reader. I don’t truly understand anything or hold on to it until it’s been put in story form,” she said. “Other people just absorb information; they can understand a baseball game by reading the box scores.” It’s difficult to craft a narrative which does both.

“As writers, we have to think about those two types of readers, and we’re not going to please all of them,” she said.

What engages readers more, and what they retain more, comes in the form of stories, or narratives. Articles are informational. They are transactional devices that transfer information or knowledge to a reader. Stories are experiential. They provide a vicarious experience to readers to help them get into, as close as possible, another life. Most movies are that way, she said, citing “Star Wars Rogue One” as a prime example of how storytelling transported her to another planet and made her breathe that atmosphere.

“It has the ability to transform my understanding of things,” she said. The closer you get to the center of a story, the more transformational it can be. “One of our jobs as journalists is to enter worlds that our readers can’t and then take them there.”

Take the standard five W’s and H and think more cinematically, she suggests. “Think stories, think literature, think fiction, think fairy tales. You have reporting tools that you know and use all the time, but they can go deeper and be expanded.”

A pure narrative has a relatable character who faces a complication. This sets the “hero” off on a journey. Storytelling takes the character through plot points, tries to resolve complications and raises the stakes (rising tension) to climax. Then something fundamental changes – something outside helps the hero or transforms the hero so that there is a happy ending.

“That doesn’t happen too often in journalism,” Banaszynski said. Rather than write pure narrative, journalists do stories with narrative elements. Moreover, it’s not always appropriate to take this approach, because you can’t put something into narrative form if it doesn’t make sense.

Banaszynski broke down these elements in depth, and provided dozens of helpful tips, such as the value of writing visually and varying what she called the “camera” distance – zoom in for power, pan out for an explanation, move quickly through transitions.

She suggested reporting and writing with sensory details; using the five physical senses, and emotion, to connect with the reader. Along the way, she shared several of her stories, as well as those of others, that grab the reader right from the lede.

While Banaszynski is enthusiastic about this approach, she also is a realist. “Do the work you have to do to help you pay the bills, but save some of the really good ideas for the stories you want to do differently.”

As she wrapped up, Banaszynski offered another piece of advice that all attendees could relate to: “Endings are really hard.”

Try to find the natural ending, which is often three or four paragraphs before the story’s final word on the page, she advised. End strong, but don’t end false. Get rid of whatever doesn’t add to the story.

When done right, Banaszynski said, using storytelling elements can take print and digital stories to a whole new level, while staying faithful to the principles of solid journalism.

See tweets from this session for more tips.