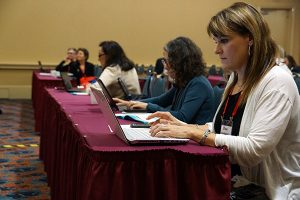 “Can you afford to write a book?”

This question keeps many journalists awake at night. It also served as the title for a compelling panel discussion at Health Journalism 2017.

The harsh and rewarding realities of taking on a book project – from the original moment of inspiration to the promotion of the final product – were explored by experts, including publishing industry veteran Amanda J. Moon. She suggested that even before weighing the financial considerations of embarking on a book, there is a more fundamental question that needs to be asked:

“How badly do you want to write this book?”

“You have to love your topic,” explained Moon, who is director of the Scientific American/Farrar, Straus and Giroux book imprint. “It has to feel urgent to you.”

That belief and sense of urgency need to be strong enough to sustain the author through the challenges he or she may encounter along the way. Proposals take months to write, on the author’s own time and dime. The search for a publisher takes longer still. The advance might sound adequate, but the money is paid out in portions. Funds can dwindle as the work goes on – and on. To keep the bills paid, authors might want to consider publishing magazine articles related to their projects “without giving away too much of the book,” Moon said.

“It was all more complicated than I thought,” acknowledged DeVita-Raeburn, whose books include “The Empty Room: Understanding Sibling Loss.”

Yet such struggles are not universal. Some authors are independently wealthy. Others benefit greatly from the help of spouses who serve as unpaid first readers, editors and fact-checkers.

“It is very common among male book authors to have free labor,” observed journalist and author Maryn McKenna, whose latest book “Big Chicken: The Improbable Story of How Antibiotics Created Modern Agriculture and Changed the Way the World Eats” will be published in September. For those without family wealth or resources, there are communities of colleagues who support one another she said.

“It makes up in some ways for the money they cannot otherwise spend.”

DeVita-Raeburn’s husband, Paul Raeburn, spoke from his own experiences in writing books.

The time spent building a good proposal will pay off in the long run, he advised. The rejections from editors should not be taken too personally. The challenge of writing a book is ultimately deeply rewarding, noted Raeburn. His titles include “Acquainted with the Night: A Parent’s Quest to Understand Depression and Bipolar Disorder in His Children.”

“It is tremendously satisfying trying to do it,” he reminded the audience. “We are all talking about how difficult it is. But we are doing it. Collect all the information you can. And have fun.”