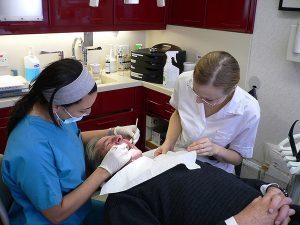 Among those receiving the appeals are dentists, who have been among the leading prescribers of opioid pain medications, according to numerous studies. Dentists regularly write the prescriptions for patients who have undergone surgical tooth extractions, according to a research letter published last year in the Journal of the American Medical Association (JAMA).

Of the more than 79 million prescriptions written for opioid analgesics in 2009, dentists were the third most frequent prescribers, according to another study in JAMA.

But as awareness grows about the risks of addiction, many in the dental profession are reassessing their prescribing habits. State dental boards are issuing new guidelines for patients and practitioners in an effort to stem the flow of addictive drugs, Philadelphia-based radio journalist Elana Gordon reported in a recent piece that aired on National Public Radio’s Weekend Edition Sunday.

“Dentists have long been frequent prescribers of immediate-release opioids like Vicodin and Percocet for the pain from tooth extractions,” Gordon told listeners. “That’s a lot of pills and teeth; annually more than 3.5 million people, mainly young adults, have their wisdom teeth removed.”

For her story, Gordon, who is a fellow with the NPR and Kaiser Health News Reporting Project on Health Care in the States, interviewed dentist Joel Funari, who was part of a group tasked by the Pennsylvania department of health to review prescribing guidelines.

After a review of the science related to pain management in dental care, Funari said he and his colleagues concluded that over-the-counter drugs often could serve as safer alternatives to opioids.

“Non-steroidal anti-inflammatory drugs – the Motrins, the Advils, the Aleves – when used in a certain way, are very effective,” Funari told Gordon. “More effective than the narcotics.”

Gordon also spoke with Paul Moore, a dentist and pharmacologist at the University of Pittsburgh School of Dental Medicine, who recently helped update the American Dental Association’s prescribing guidelines for opioids. Moore disclosed that his nephew had been among the more than 3,000 people who died of overdoses in Pennsylvania last year.

“I’m very sensitive to the issue,” he told Gordon.

Hatzell recalled that an important moment in his journey into the epidemic came as a high school junior when his wisdom teeth were removed and his dentist prescribed a narcotic for the pain. His mother was so worried that she hid the pills, but he eventually found them. Hatzell took them out of the bottle and replaced them with Advil so that she wouldn’t know.

“I definitely was every parent’s worst nightmare,” admitted Hatzell, who eventually was arrested for dealing drugs in college as his addiction problems grew.

Hatzell, now 23, has been in recovery for three years. He told Gordon he never wants to go down the road into drug dependency again.

“These days, whenever he goes to a dentist or doctor, he makes it a point to say right up front he cannot take opioids,” Gordon reported.