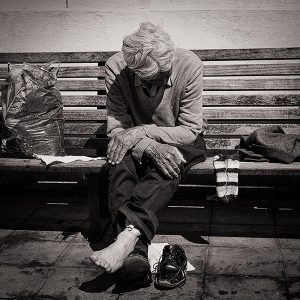 Does language make a difference when we address serious health issues such as Alzheimer’s and other diseases? Absolutely, according to researchers at Penn State College of Medicine.

Avoid the “war” metaphors, advises Daniel R. George, an assistant professor of medical humanities at the college. While such terminology is common in the medical community and the media, such language can backfire by creating fear and stigma, turning patients into victims and even diverting resources from preventive care.

“There’s a widely-accepted myth that people who have Alzheimer’s are sort of non-people, akin to zombies,” George concluded in an article in The American Journal of Bioethics.

Verbs such as “attack” and “battle” may be counterproductive if applied to a disease that we cannot defeat. It invites ways of thinking that may not be scientifically or socially productive. “War metaphors can delude our sense of what’s possible therapeutically, and give false hope to people and caregivers who are suffering,” George said.

Language too often belittles and diminishes patients, said Merrill Perlman, a freelance editor and trainer. Describing someone as “suffering” from Alzheimer’s or being a “victim” of dementia, or being “confined” to a wheelchair are some examples.

“This labels these people as helpless, to be pitied,” said Perlman, who writes the Language Corner column for Columbia Journalism Review.

Perlman, an editor for 25 years at The New York Times, advises journalists to use more neutral language. It is preferable to say, “she has Alzheimer’s” or “he is being treated for dementia,” or “she uses a wheelchair.” No one knows whether someone is suffering or considers himself a victim or confined.

“Comparing anyone with a medical condition or disease with someone who is “normal” is also insulting; that condition is “normal” to the person who has it,” she said in an email interview.

One antidote to seeing people with dementia as zombies, according to medical editor and writer Joy Jacobson, is following this advice from the Alzheimer’s Poetry Project: “We do not set boundaries in our beliefs in what possible for people with memory impairment to create. By saying to people with dementia, we value you and your creativity; we are saying we value all members of our community.”

War metaphors have been used to dehumanize in medicine and other areas of our cultural life. The “war on drugs” was disastrous for this country, and has morphed into a human rights catastrophe in the Philippines as well. Glenn Greenwald has been documenting the ravages against civilians in the ongoing “war on terror.” Nixon’s 1971 “war on cancer” was based on an overly simplistic understanding of the causes of cancer, causing incalculable suffering, said Jacobson, poet-in-residence at the Center for Health, Media & Policy in New York City.

It is easy to fall back on tired language. Calling a person with diabetes a “diabetic” is another way of dehumanizing a person with the disease, contributing to the misconception that the condition is somehow the person’s fault, according to this article in Drug Watch. Mental illness is another area where metaphors and careless words can cause harm and stigma, the Huffington Post’s Erin Schumaker wrote. She advises journalists check out this American Psychiatric Association guide to get a better handle on appropriate words and phrases.

George and his team propose moving toward different metaphors, such as encouraging the use of words such as “slow” or “postpone” rather than “prevent” or “cure.” Emphasize “building resilience” to aging processes in the brain rather than aiming at “absolute victory” over a disease.

While “fighting” and “defeating” Alzheimer’s through drug development is important, the authors argue it may be wiser to acknowledge that Alzheimer’s is not a disease disconnected from the aging process, as opposed to polio or malaria. They note that Alzheimer’s has been classified as a disease for 40 years. It may be more beneficial to take a lifespan-oriented approach to discussing the condition, including education about known biological, psychosocial and environmental risk factors, investment in societal programs and infrastructure that support brain health, and ensuring proper care for those affected and their caregivers.

“There are ways to construct meaning around memory loss that show greater compassion and solidarity toward people with cognitive frailty, rather than seeing them as passive victims in our biological war against the disease,” they said. “You can still have a life with profound purpose, social contribution and meaningful relationships.”

Medical humanities is a discipline that seeks to re-humanize medicine through a fusion of art, science, ethics, religion, literature, Jacobson said.

So what does it mean to restore humanity to medicine? “One important aspect is bringing greater attention to the language we use,” she said. “This issue isn’t just the province of poets and professors. How we speak about and to one another is crucial, in health care and elsewhere.”

AHCJ’s Statement of Principles offers some guidance on language: