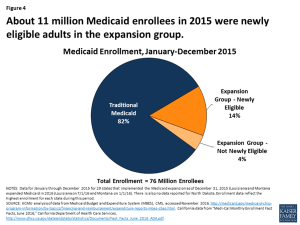 The New York Times Magazine’s recent feature, “Life in Obamacare’s dead zone,” looked at the Medicaid gap we’ve frequently written about since the Supreme Court in 2012 made the ACA expansion optional for states.

The article describes how people who fall into the bizarre coverage gap – in which they are too poor to get subsidized coverage that people just a few slim rungs up the income ladder can get – cobble together care, or just do without, often with pretty grim consequences.

With the GOP planning to undo Medicaid expansion in those states that did take advantage of the program and the accompanying federal financing, there are a lot more questions about future coverage for low-income people.

Among the many things we don’t yet know about the Republicans’ health policy agenda and timetable is how far they will go toward their goal of overhauling Medicaid. Will they push to end the traditional open-ended entitlement and turn it into a capped system, either through block grants to the states or a per beneficiary payment? Will it be free-standing legislation or part of the ACA repeal and replace? Will that be one, two, three years from now – or longer? Or never?

They are likely to repeal the Medicaid expansion under the Affordable Care Act. They are expected early in 2017 to pass a budget reconciliation bill that will dismantle large parts of the ACA, although the changes likely won’t take effect until a transition period not yet stated.

Right now, 32 states and Washington, D.C., have expanded Medicaid under the ACA. A handful of others might have joined them if Hillary Clinton had won. Even with 19 states sitting out expansion, repeal will have a significant impact. Although GOP plans are evolving, the Kaiser Family Foundation and the Urban Institute both have made assessments about the expected impact. For example, if the GOP leadership moves toward a block grant system, states may be able to cover some of the population at risk of losing coverage as Medicaid expansion is rolled back. But the states would have less federal funding.

A lot of this is in flux. As KFF notes in this issue brief on Medicaid and ACA repeal, “While it ‘s hard to quantify the specific effects of a repeal of the ACA Medicaid expansion given the many uncertainties that remain at this time, examining the changes in coverage and financing that have occurred under the Medicaid expansion provides insight into the potential scope of coverage and funding that may be at risk under a repeal.”

Kaiser estimates that 11 million adults gained coverage through expansion. Other people already eligible for traditional Medicaid (but not previously enrolled) were swept in after expanded outreach, publicity and enrollment efforts. The Urban Institute estimates that about 12.9 million fewer people would have Medicaid or Children’s Health Insurance Program coverage in 2019. The issue brief does not break that down into expansion and traditional Medicaid populations. The Urban Institute also estimates that state spending on Medicaid and CHIP would fall by $76 billion between 2019 and 2028, but that estimate is based on some past GOP legislation and could shift in either direction in the next few months.

For those of you looking for state-specific data, the Kaiser report included state-by-state Medicaid enrollment, specifying who became eligible under expansion. See Table 2 in the appendix. CMS also has data, but Kaiser updates more recently.