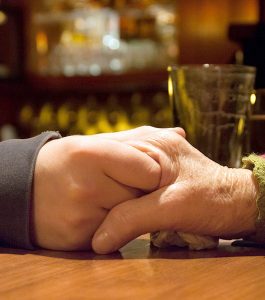 More than a quarter of older Medicare beneficiaries have yet to document their advance care planning (ACP) wishes, according to a recent study by researchers at the University of California, San Francisco. Latinos, African-Americans, those with lower education levels and people with lower incomes were at greatest risk of not discussing or carrying out ACP.

That leaves many people subject to receiving end of life care that they may not want and may go against their values and wishes, according to Alexander Smith, M.D., senior study author and an associate professor of medicine, geriatrics and palliative care at UCSF. Surprisingly, people who were sickest did not engage the most with this issue, Smith said, noting that people with dementia, disabilities or multiple medical conditions had similar or lower rates of advance care planning compared with healthier adults.

“That’s worrisome. You would think that if you were on the road to having dementia, that would spur you or your physician to start this ACP process,” he said in a phone interview. However, the data indicates otherwise. It suggests that people who are doing ACP are more likely to be healthy, more educated and white, he added.

The research study, published in the October 31 issue of JAMA, was led by Krista Harrison, Ph.D., a geriatrics research fellow. (Note: In a first for this reporter, Dr. Harrison missed our scheduled interview for this blog because she went into labor.)

Researchers analyzed data from the National Health and Aging Trends Study (NHATS) of community-dwelling Medicare beneficiaries age 65 and older, in 2011 and 2012. They looked at the strength and magnitude of the relationship between socio-demographics and health characteristics of older adults and engagement in ACP.

Sixty percent of the 2,015 participants reported having an end of life discussion. Half (50 percent) had a durable power of attorney (health proxy). About half (52 percent) completed an advance directive (AD).

However, one in four – 27 percent – had no ACP elements. Older, Spanish-speaking Latinos had the lowest prevalence of ACP of any group, with only 19 percent reporting end of life discussions, 20 percent appointing a health proxy, and 17 percent having an AD.

Amy Berman, B.S.N., senior program officer for the John A. Hartford Foundation, said the findings are not surprising. People on the lower end of the socioeconomic spectrum and people of color are consistently less likely to have advance care planning, she noted.

Berman, who works to advance palliative care initiatives, speculated that there is a history that ties into some peoples’ culture and character; they may not trust their health care team in same way that other groups do. They may not be as willing to have these kinds of conversations, or may be concerned about someone guiding them towards care that is against their wishes.

Seventy-five percent of people are unable to make some or all decisions themselves at the end of life, according to Berman. “They may have had conversations with their families, or with a clergy member, but the difference between that and documenting their preferences for the health care team is really significant.”

Berman last year shared in The Washington Post her experience living with stage IV breast cancer. “The reality is, without these [health provider] conversations, people are 100 percent guaranteed to get the care that somebody else wants them to have,” she said. “But there is no guarantee that it will be the care that they want.”

Health literacy, a lack of materials available in other languages and few incentives for physicians to have these conversations with patients may be additional factors affecting ACP, said Smith. While these theories are beyond the scope of the study, other research indicates that many socioeconomic and cultural factors affect advance care planning.

“We can’t just target interventions to physicians, we also need to target efforts to the community,” he said. Conversations have to happen in churches, community centers, assisted living facilities, nursing homes, or wherever older people get together.

How to Get Started

The most important thing is to determine whom the doctor should talk to if the patient has problems making decisions for himself, according to Smith. That is the health care proxy or durable power of attorney. The patient and proxy should discuss what goals, values and preferences are important in the setting of serious illness.

A proxy doesn’t need to be a spouse or family member. It can be a friend. “They don’t have to agree or have same values, but they have to know what this person’s values are and be willing to stand up for those values if that person is no longer capable of making decisions for themselves,” Berman said.

Only then should the physician interpret and explain how these goals and values will be put into action for care and document them in the patient’s chart, Smith said. That includes completing the POLST form and signing a do-not-resuscitate (DNR) order.

“It’s really important that people have that ability to express what they want,” Berman said. “There is strong evidence that when it is in the record clinically, that it is supported.”

Community-based programs can help families to get the conversation going. The upcoming holidays may be a good time to initiate a conversation about ACP, particularly with parents or older relatives. Berman said having conversations with her family led to better decisions about her care. “Without these conversations, I probably would have been forced down a road I didn’t want to go down.”

Journalists should help elevate ACP conversations consistently, not just around highly sensationalized stories, like those of Nancy Cruzan or Terri Schiavo, Smith said.

The issue often fades from public view after these cases. “These things are happening in unpublicized ways all around the country,” said Berman, who encouraged reporters to look at people with dementia, people with disabilities (who often are marginalized), or from specific population groups for inspiration.

“There are a lot of these stories that need to be told and there’s kind of silence around them. I think there’s more to be done,” she said.

Here are some questions to ask in your reporting.