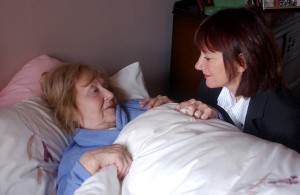 What happens now? For those working in aging services, opinions range from cautiously optimistic to downright fearful.

Aging experts and service providers worry about the fate of innovative home- and community-based programs that allow older adults to age in place, about vital services funded under the Older Americans Act, and about the millions of older adults who rely on Medicare, Medicaid and Social Security to get by.

Some initiatives, like the Older Americans Act (OAA), will continue by law. The OAA was reauthorized on a bipartisan basis earlier this year and signed by President Obama on April 19. Provisions are funded through 2019, according to Robert Blancato, chair of the American Society of Aging. “The new administration will have responsibility to implement the law and that should be an initial focus. However, from an advocacy perspective, this would be an important time to provide the new administration and the more than 70 new members of Congress with education and information about the importance of the Act,” he said in an email.

States will continue to operate under the terms of the reauthorization, which averted any major reductions in funding through a compromise agreement, Blancato said. Some states, like New York, may lose some dollars, but no more than 3 percent over the next three years. Other states, such as Florida and Arizona, may see small funding increases from the reauthorized law.

The fate of Medicare is now up to the GOP. House Speaker Paul Ryan (R-Wis.) has promised to actively pursue a “premium support program” and seek to overhaul the program.

Gutting the ACA could eliminate many preventive services for seniors that don’t currently require cost-sharing. “President-elect Trump pledged in the campaign to protect Medicare as we know it. Repealing or dismantling the ACA or supporting premium support is not protecting Medicare in my view,” Blancato said.

However, there’s more than one solution, Anne Montgomery, deputy director of the Center for Elder Care and Advanced Illness at the Altarum Institute said in a phone interview. “There’s no need for Congress to slap on the budgetary brakes.”

There are proven approaches to saving money within the Medicare care system, Montgomery said. She thinks that reinvesting those dollars into the OAA and other proven care models such as PACE would allow frail elders to remain in the community, stay out of crisis, avoid or delay costly nursing home or hospital care.

Not everyone is so optimistic. At an Altarum-sponsored conference on caregiving held in Washington, D.C., this week, Kevin Simowitz, political director of Caring Across Generations, said that “looking at the GOP track record, it’s hard to feel hopeful” for family caregivers. He pointed out that caregiving was an issue that was noticeably absent from the presidential debates; there is little information on how a Trump administration will deal with the issue.

Caregiving is a bipartisan challenge

The good news is that family caregiving is an issue that cuts across party lines, according to Democratic political strategist Celinda Lake, president of Lake Research Partners. In an omnibus survey conducted by her organization and Republican strategic research and polling firm The Tarrance Group of 2,400 likely voters pre-election and on election night, one in five voters (20 percent) believed that financial help for family caregivers and easier access to care workers and in-home services would be most helpful for those supporting someone who is ill, disabled or elderly. And, 41 percent said financial help, easier access to care workers and more suitable housing (an all-of-the-above choice) are equally as important.

Skills training, increasing the minimum wage and providing benefits for care workers were also cited as important. “This is a huge problem for a lot of people,” Lake said. “It’s an expanding issue that gets worse every year and cuts across political leanings.”

Joanne Lynn, M.D., director of Altarum’s Center for Elder Care and Advanced Illness, said that shifting the focus of choice and power to the local level may be one strategy for reimagining public programs that help seniors. “Look to the states to see what works,” she said. States as diverse as Maine and Mississippi have developed innovative solutions to their older residents’ long-term care needs. Washington also is considered a leader in inventive care for older adults.

But help is also necessary on a federal level, according to Judy Feder, Ph.D., professor at the McCourt School of public policy at Georgetown University. She believes that a public long-term care option is the missing piece in the social safety net. Fourteen percent of people will need five or more years of long-term care, she said. “The good news is that some bipartisan groups are starting to have conversations about this issue.”

Medicaid is yet another area of tremendous concern under the new administration, Blancato said. Trump has proposed changing Medicaid payments to states under the Affordable Care Act to a block grant approach. Blancato cited this move as a big risk to low-income elderly people.

“Inherently block granting Medicaid is a serious threat to older adults on Medicaid and anyone of any age on Medicaid. It leaves too much control in the hands of the state with insufficient accountability on how funds are spent — it could be accompanied by a reduction in funding.”

As we enter a more populist era, Montgomery predicted that the debate on how to best fund health care for seniors will only grow more complex. “The challenge is growing and the rules are different.”

Aging is a universal, bipartisan issue. It requires solutions that address the needs of an entire population. It’s up to those in Congress, state houses and city halls to create cross-party remedies to help those who need it most. And, it’s up to advocates for older adults to hold politicians’ feet to the fire.