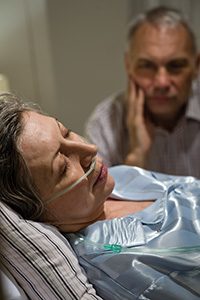 While the dust may still be swirling around the presidential election, voters in Colorado were crystal clear about their support for Proposition 106, The Colorado End-of-Life Options Act. Nearly two-thirds of voters (64.6 percent) approved legalizing assisted death for patients with a terminal illness who desired it. A prognosis of death within six months would be required.

As The Denver Post reported, patients meeting this and other criteria would be allowed to self-administer aid-in-dying drugs to die voluntarily. The law was modeled on Oregon’s “Death with Dignity” law and strongly supported by Deborah Ziegler, the mother of Brittany Maynard. Maynard was the terminally ill 29-year-old who used Oregon’s law to end her life in 2014. Her advocacy helped spur California legislators to pass a similar law in 2015.

In a statement, Barbara Coombs Lee, president of Compassion & Choices Action Network, congratulated Colorado on becoming the sixth state where “more people have peace of mind at the end of life and fewer suffer unnecessarily.” She called the result a “tremendous victory for terminally ill adults who worry about horrific suffering in their final days.”

Opponents of the law say they will fight to overturn it, citing ethical concerns and the risk of endangering the elderly and those with disabilities.

Washington and Vermont also have aid-in-dying laws. In Montana, the state supreme court ruled that physicians can prescribe intentionally lethal drug overdoses for the purpose of assisted suicide and a doctor could use a patient’s request for assistance as a defense if charged with assisting a suicide.

The District of Columbia will become the seventh jurisdiction in the U.S. where medical aid in dying is authorized for terminally ill residents. On Nov. 15, the D.C. Council passed the D.C. Death with Dignity Act by a veto proof 11-2 margin. D.C. is the largest and most diversely populated east coast jurisdiction to authorize medical aid in dying, according to Donna Smith, D.C. field and legislative manager for Compassion & Choices. Mayor Muriel Bowser said she will not veto the bill. Under D.C. law, the bill now goes to Congress for review. A 2015 poll found that two-thirds of D.C. residents (67 percent) support medical aid in dying.

This analysis by the Colorado Health Institute helps put the issue into perspective and provides historical context for the emotionally charged debate. This editorial in the Concord Monitor in New Hampshire raises some difficult, but important questions.

End-of-life-choice supporters are working to pass legislation in more than a dozen other states, including New Jersey, New York, Minnesota and Hawaii, according to this article by Melissa Bailey.

My 2015 Q&A with Nancy Berlinger, Ph.D., of The Hastings Center explored how far the conversation about dying and end-of-life options has come in the past 40 years. Berlinger also discussed whether issues like aid-in-dying should be handled at the state or national level.

Journalists may want to take a closer look at the status of end-of-life legislation under consideration in their state. This interactive map offers a quick overview of which states are considering proposals. Here are some questions to ask: