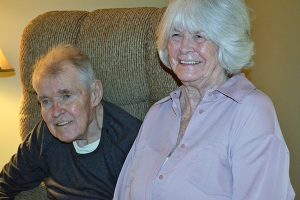 Photo: Liz Seegert/AHCJBernard Cunniffe, shown with his wife Beverly, was assisted by his city’s Community Paramedics initiative after an accident.

When 84-year old Bernard Cunniffe fell in the bathroom one morning, his wife called the paramedics. However, rather than transporting the retired NYPD officer  to the emergency department, the specially-trained responders assessed him for trauma, evaluated his vital signs and settled him into his bed.

Cunniffe, who is homebound because of multiple medical conditions, was uninjured but had low oxygen saturation, the likely cause of the fall. The community paramedics quickly stabilized him in consultation with an on-call physician and avoided a trip to the hospital. The Cunniffes were thrilled with the experience.

Without the Community Paramedics initiative, he would have been taken to the emergency room for similar treatment at much greater cost and stress on both of them. When chronically ill people are transported to the hospital under emergency scenarios, they often end up disoriented or can’t cope with the constant activity and new faces. Instead, Cunniffe’s physician stopped by the house later that day to see how he was doing.

The Community Paramedicine (CP) model is part of Great Neck, New York-based Northwell Health’s House Calls program, where paramedics are part of its integrated care delivery strategy. The paramedics act as so-called physician-extenders who provide in-home urgent care for patients with multiple, chronic, debilitating conditions. Results of this and other community paramedics programs are promising, according to Karen Abrashkin, M.D., a House Calls physician and director of the program’s call center.

“It is really fulfilling,” she said in a phone interview. “We have been doing this for a while, and it is gratifying to know we are doing the right thing for the patient and the health system by keeping people out of the hospital who really don’t need to be there.” House Calls is currently part of CMS’ Independence at Home but was established before the demonstration project. “It combines that feel-good aspect of making house calls with that technological edge to support them,” she said.

Abrashkin recently conducted a study on Northwell’s community paramedic model and its effect on emergency department use. Compared with traditional EMS calls, only 22 percent of CP responses required transport; 78 percent were evaluated and treated in the home. The CP patients had higher rates of admission, which Abrashkin said points to sicker patients who want and need to be hospitalized.

“Importantly, the CP team and the physician understand a patient’s goals of care,” Abrashkin said. Most of the patients, about 90 percent, have completed medical orders for life-sustaining treatment, and have discussed treatment goals with a physician.

“Even if someone is extremely sick, we can talk about what the options are and let the patient make that decision. We will support whatever they choose with all the care they need, including hospice if it is indicated,” she said.

Emergency calls for program members are triaged through the health system’s House Calls call center, rather than a traditional 911 system. Nurses trained in CP best practices consult with an on-call nurse-practitioner or a physician. They determine whether self-care, a physician house call, ambulance or a community paramedic is appropriate. Since call center nurses can access the patient’s electronic medical records, they can provide valuable information – such as medications, recent medical history, and any DNR order – to responders to give them a better sense of the patient’s background before they arrive.

Josh Charry, a paramedic for 20 years, has been part of the CP program since its inception. Changing his mindset away from automatically transporting a patient to the ED was tough at first, Charry said, but now he feels more at ease switching between roles. “The first few times it knocked me for a loop, and really opened my eyes to how sometimes the ED is not necessarily in the patient’s best interest.”

Every call is different, and each visit requires different assessments through secure teleconference with the on-call physician. “I could be on scene for 45 minutes as I was with Mr. Cunniffe, to several hours if a person remains unstable, to taking one look and telling the patient we have to go now,” he said.

When I recently visited the Cunniffes at their home, both told me how grateful they were for the CP program, and the opportunity to participate in House Calls. “I like it a lot,” Bernard  Cunniffe said. “I would rather do it this way.”

“This has not only been a lifesaver for him, but it also is for me,” Beverly Cunniffe added.

Other communities are experimenting with their community paramedicine programs including several counties in California, in Ft. Worth, Texas and Poughkeepsie, N.Y.. A program also is in planning for Dallas. According to Northwell, their CP program is the largest of its kind and the only one in the New York City-area. They plan to reinvest the cost savings achieved to bring services to more patients in need.