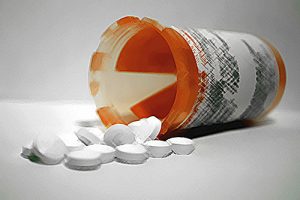 Some fragility fractures – those that occur at standing height – may be preventable by modifying a patient’s prescription drug regimen.

Older adults are more prone to these types of fractures, costing the U.S. health system about $16 billion annually in direct medical costs. Patients who already have had one fracture are more likely to incur additional ones. Reducing the likelihood of a broken hip or shoulder could mean the difference between someone ending up in a nursing home or aging at home.

A team of researchers recently looked at whether there was an opportunity to reduce exposure to prescription drugs associated with fracture risk among an especially high-risk group – older adults who have already experienced a first fragility fracture. The researchers, from the Dartmouth Institute for Health Policy and Clinical Practice and the Boston University School of Public Health, identified 21 drug classes that have been associated with increased fracture risk. These include commonly prescribed medications such as antidepressants and antacids.

The new study appeared online in the Aug. 22 issue of JAMA Internal Medicine.

“The goal was to look at whether physicians take the opportunity to actually sit down with patients and discuss the risks and benefits of certain drugs or explore alternative therapies,” Jeffrey Munson, M.D., Dartmouth Institute assistant professor and the study’s lead author, said in a phone interview. “This conversation doesn’t appear to be happening consistently.”

An estimated 10 million people in the United States have osteoporosis, and 18 million more are at risk of developing the disease. Another 34 million Americans are at risk of osteopenia, or low bone mass, which can lead to fractures and other complications, according to the American Academy of Orthopedic Surgeons. It notes that about 1.5 million fractures annually are due to osteoporosis, including 350,000 hip fractures. Seventy percent of those suffering fractures from osteoporosis do not fully recover.

The Dartmouth data and earlier studies show that use of bisphosinates – drugs that increase bone density – is very low, even among elderly patients. Only about a third of patients in the study were meeting what are considered value-based quality metrics, including the standard of taking bisphosphonates to treat osteoporosis. “The physician community as a whole hasn’t done a very good job of viewing this problem as a preventable problem,” Munson said.

What the Study Found

Munson’s team analyzed data from a sample of 168,133 Medicare beneficiaries (84 percent were women and the average age was 80) who experienced a fracture of the hip, shoulder or wrist, the most common types of fragility fractures. Medicare Part D retail pharmacy claims were used to measure fills for prescriptions associated with increased fracture risk both before and after the fracture occurred.

The study found that more than three-quarters of the patients were exposed to at least one non-opiate drug associated with an increased fracture risk during the four months before their fracture. About 7 percent of patients discontinued these drugs after their first fracture, but that decrease was offset by new users, so the total proportion exposed to high risk drugs did not change.

“We did not see a consistent reduction in the use of these drugs after the fracture event. So that allows for the strong possibility we may be able to prevent at least some of these secondary fragility fractures through better management of high-risk drugs around the time of the first fracture,” Munson said.

He speculates that a combination of factors, including a knowledge gap among physicians and good systems to catch the problem, contribute to missed opportunities to educate both providers and patients about drug-related fracture risk. Electronic health records could alert physicians to potential risk, but the problem of “alarm fatigue” can lead to ignored warnings.

People often believe that the benefits of certain medications are greater than they actually are, Munson explained. Similarly, they tend to underestimate the risk of taking these drugs. But as this Minnesota Post article points out, some researchers believe using more medications to prevent hip fractures isn’t the answer either. Instead, they recommended a greater emphasis on fall prevention programs and exercise.

Fragility fracture programs are another way to help physicians and hospitals manage risk of future trauma by coordinating care between multiple providers. That can result in better outcomes and decreased risk of readmission.

There is no better plan than for physicians and patients to talk about why they’re using medications and the potential benefits and risks, Munson said. Patients should have enough information to decide how much risk they are willing to take.