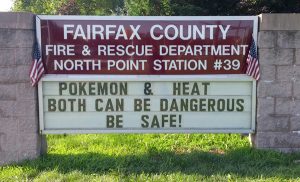 The story angles for Pokémon Go appear to be almost as limitless as the game’s sudden and phenomenal popularity.

What can Pokémon Go tell us about the future of health care? The technology behind Pokémon Go is a worth tracking because it has the potential to change how providers and patients give and absorb information.

What is the technology behind Pokémon Go?

Pokémon Go taps into your iPhone or Android smartphone’s GPS and clock to orient you in the real world so you can catch Pokemon creatures that pop up on your screen. As you walk around your neighborhood or city with your phone, more Pokémon appear to collect. German Lopez at Vox has a nice explainer on the game.

The technology behind Pokémon Go is called “augmented reality.” In augmented reality, computer-generated aspects (images, sound) are layered over the world around us. Augmented reality is sometimes seen as an intermediary between the real world and the immersive world of virtual reality.

For a primer on augmented reality, tune into the July 15 episode of Science Friday, hosted by Ira Flatow.

What are the potential health care applications for augmented reality?

Pokémon Go could serve as a gateway for widespread adoption of other augmented reality applications. Think about how Skype and FaceTime have helped doctor visits via computer screen (telehealth) gain public acceptance.

If augmented reality can expand our relationship to information – and health care is an information-based sector – then it could dramatically alter the health care landscape.

Augmented reality also could help architects design more patient-centered hospitals and health centers. It could enhance patient education and experience across the care continuum – in the hospital, at discharge and through home health support.

Much of this is a ways off from implementation. But MedPage Today lists some examples of companies already integrating augmented reality into their health care applications.

“Pokémon Go has changed my expectations on how to access information,“ wrote Om Malik in The New Yorker.

Malik is likely not alone. Perhaps Pokemon Go will be just what the doctor ordered.

2 thoughts on “What Pokémon Go could mean for health care”