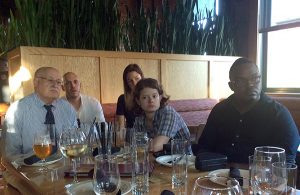 More than 20 people came to the July 14, AHCJ chapter event in Washington, D.C., to learn about how technology affects health and what regulatory issues to watch out for.

The conversation was moderated by Politico Pro’s David Pittman (@David_Pittman), who covers health information technology. Pittman, who proposed the event, invited the panelists for their participation, and pitched the idea to the chapter co-chairs. The panelists were:

Lewis spoke about how new technology is tested and the types of privacy issues that regulators watch out for. In using other medical technology, including electronic medical-record keeping software, hospitals and doctors are still learning how to best share data with each other. The hope is that clinical trials will be able to happen faster through some of these technological advances. 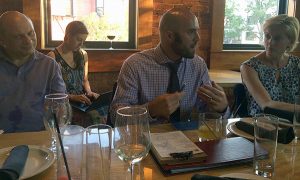 Rothstein explained how items like wearables— such as the Fitbit — are different from medical devices. While they help people keep track of their steps or their calories, he explained, they do not treat or mitigate a particular disease and do not claim to do so. For this reason they are not regulated by the Food and Drug Administration.

Drobac spoke about the telemedicine angle. While it gives patients the opportunity to visit virtually with a doctor at any time, and has been shown to reduce readmissions in patients who participate, many do not take up the technology. Some doctors also won’t use it because it often isn’t reimbursed through Medicare. 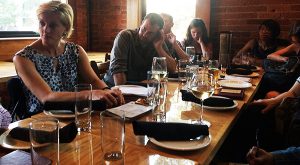 The casual discussion was at Matchbox on 14th Street as reporters sat at a table. At the beginning of the event, attendees spent time networking and enjoying beverages.