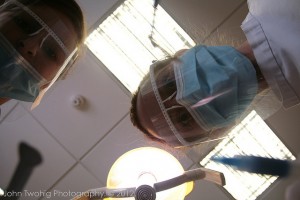 In a three-sentence brief, WCAX-Burlington, Vt., got out the big news:

“Gov. Peter Shumlin, D-Vermont, signed a law meant to expand dental care in Vermont. It creates the position of dental therapist, who is not a full dentist is able to do more than a hygienist.

“Advocates say the law will help address a shortage of basic dental care, especially in rural areas and for lower income people.”

The signing of the law brought closure to a debate that has engaged state legislators, grassroots groups and dental organizations for five years.

The new law enables dental hygienists who receive additional training to perform procedures such as drilling teeth to pursue a license to work in the state as a dental therapist. The providers would work under the general supervision of a licensed dentist.

Backers hope therapists, long used in countries such as New Zealand, will provide a cost-effective way of expanding access to care. “By adding a dental therapist, a dental practice would be able to accept and provide basic preventive and restorative treatment to more patients without adding as much overhead as adding another dentist would require,” state Rep. Patsy French (D-Orange-Washington-Addison District) told Bob Kinzel of Vermont Public Radio.

As they have in other places, dentists fought the push to bring therapists to Vermont, Kinzel reported.

“Burlington Rep. Kurt Wright voted against the bill. He read a letter from the Vermont Dental Society outlining its strong opposition to the legislation.

“We are convinced that this proposal, if enacted, will eventually create a two-tier system of dental care in Vermont with some patients seeing a dental therapist and others seeing a dentist,” Wright read during the debate. “Vermont State Dental Society feels strongly that every Vermonter should be entitled to see a fully educated licensed doctor of dentistry.”

In spite of these arguments, the model has slowly been gaining ground. In Alaska, dental therapists overcame a court challenge by dental groups and have been working in the state’s tribal areas for more than a decade. Minnesota and Maine also have adopted variations of the dental therapist model.

Last year, the agency responsible for overseeing dental education in the United States agreed to move forward with plans to establish a national accreditation process for dental therapist training programs. Earlier this year, the Swinomish Indian Tribal Community in Skagit County in Washington state announced it was putting a dental therapist to work in its clinic. Oregon recently approved a pilot program allowing two tribes to hire the midlevel providers. And in Massachusetts, the state Senate recently approved an amendment authorizing dental therapists.

Additional states including Kansas, Michigan, New Mexico and Ohio are in the process of considering legislation, pilots and other proposals to authorize such providers, according to the Pew Charitable Trusts, which has strongly supported the use of dental therapists.