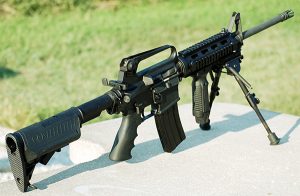 And there is at least one way they appear to be succeeding: giving less attention to the killer than to the victims. Though research is limited, studies have suggested that this approach is more responsible if one goal is not to inadvertently inspire future massacres.

Of course, the media cannot ignore the perpetrator or withhold his name, but as NPR’s Kelly McEvers reported for All Things Considered, there does appear to be more of a conscious effort this time to avoid repeating his name and image over and over in the mainstream channels and publications. Out of curiosity, I did a series of completely unscientific Google image searches of the Orlando shooting and nine other mass shootings in the past several years to compare the results.

In the image search for “Orlando shooting,” the vast majority of images are of victims, vigils or the Pulse night club, with only a few photos of the killer sprinkled in. Compare that to results for the “Aurora shooting” that occurred four years ago: It was nearly impossible to avoid seeing the killer’s image in stories about the movie theater massacre (that may be because he was one of the few killers to survive, leading to more images of him during the trial).

But the killers who (more typically) died received pretty prominent placement in Google results too: coverage of the “Virginia Tech shooting,” from 2007, focused heavily on the shooter, whose image appears frequently in the results, and it’s hard to escape the many images of each killer for the “Newtown shooting” and the “Santa Barbara shooting.” Likewise, a search for “Fort Hood shooting” pulls up images of the killers for each the Fort Hood massacres, again pretty high up in the results and sprinkled throughout, and the “San Bernardino shooting” results include the killers right up top.

But things start changing as we move closer to present day. Both “Charleston church shooting” and “Umpqua shooting” (the Oregon community college) have a substantial number of the respective killers’ images, but they’re further down in the results. Images of victims dominate. And you don’t see the “Orlando shooting” killer in the search until you scroll down a bit. (I used the city for each one with “shooting” to be as consistent as possible but, again, this is a cursory one-off search.)

Many reasons may account for these findings, including the fact that coverage is ongoing for the Orlando massacre, but it’s hard to miss the gradual transition to focus less on the murderers, and FBI director James Comey drew attention to his conscious choice at a press conference: “You will notice that I am not using the killer’s name. And I will try not to do that. Part of what motivates sick people to do this kind of thing is some twisted notion of fame or glory, and I don’t want to be part of that for the sake of the victims and their families and so that other twisted minds don’t think that this is a path to fame and recognition.”

There is research to back up his concern. A PLOS ONE study in July 2015, “Contagion in Mass Killings and School Shootings,” suggested that one in three mass killings and one in five school shootings had been inspired by previous ones. It was well covered in CNN, Newsweek, Yahoo and elsewhere. Even before that study, the Chicago Tribune explored the topic, a piece in The Atlantic compared risks of irresponsible mass shooting coverage to the risks already solidly established from careless reporting on suicides, and an op-ed in The New York Times suggested notoriety as a driving motive for many mass killers (though the article ironically starts with a list of their names). A 2009 Time piece examined media coverage and copycat behavior for any murder-suicide.

When the Umpqua, Ore., community college shooting happened several months after the PLOS ONE study, many more articles than ever before investigated the media’s responsibilities in covering these horrific events while they dominate the news cycle for days or weeks. Quartz, Mother Jones, FAIR, Huffington Post, National Review,  Newsweek, Al-Jazeera America and other publications recommended introspection and caution, usually citing the study. It seems most publication were paying attention: the Google image search for Umpqua had the least number of killer photos until Orlando.

Though Al-Jazeera America’s story noted that too little research exists on media coverage and copycat mass killings to draw firm conclusions, a How Stuff Works article cites other supportive research besides the PLOS ONE study. In the recent NPR story, Zeynep Tufekci, a professor of technology and sociology at the University of North Carolina, Chapel Hill, suggested developing “sensible guidelines so that the coverage of such mass shootings is not done on the killer’s own terms,” just as guidelines exist for reporting on suicide.

It seems the tide is already moving in that direction. And I haven’t mentioned a single mass shooter’s name in this lengthy post.