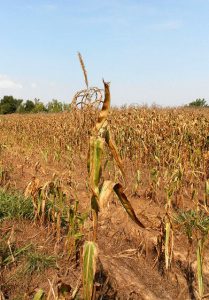 Photo: CraneStation via FlickrIs this drought-stricken field a victim of global warning, climate change or something else?

Writing about the increasing temperatures around the globe has been a mainstay of environmental and science journalism for decades, but it has become increasingly more relevant for health journalists as well. Environmental health has always been a significant part of health coverage, and the impact of climate change on human health grows larger by the year. For example, covering natural disasters such as hurricanes (a great guide here) or tornadoes, or simply writing about extreme heat waves often calls for at least a mention of climate change these days.

Even journalists who primarily focus on medical research or even more specific beats will find it hard to escape the relevance of the earth’s changing climate to the issues they report on. As noted in this primer for journalists on climate change and health, infectious diseases, allergies and respiratory disorders are among the conditions in the medical research that can relate to climate change.

But the language that journalists use in writing about climate change may influence how readers receive the story. So far in this post, I’ve used “climate change,” the term typically favored in medical research and by scientists. Another description used by the general media before that term came into vogue is “global warming.” Though often used interchangeably, these two terms do not have the same meaning and definitely aren’t always received the same way.

Like the different responses people can have when they encounter the terms “Affordable Care Act” and “Obamacare,” both “climate change” and “global warming” come with political baggage. Several years ago, Virginia and North Carolina lawmakers argued over removing the terms “sea level rise” and “climate change” from two bills. The Journalist’s Resource has looked at the issue, referencing a 2014 study about two separate surveys that involved more than 2,600 American adults.

Here is how that study defines the difference between the terms:

Global warming refers to the increase in the Earth’s average surface temperature since the Industrial Revolution, primarily due to the emission of greenhouse gases from the burning of fossil fuels and land use change, whereas climate change refers to the long-term change of the Earth’s climate including changes in temperature, precipitation and wind patterns over a period of several decades or longer.

Despite this difference, the terms were regarded as straight synonyms by survey respondents who were self-identified Republicans. They tended to find the term global warming a bit more threatening. Along the same lines, several political, age, gender and minority groups were less engaged by the term climate change, but more worried about global warming.

Overall, respondents said they heard and used global warming much more often, but were equally familiar with both terms. Global warming was more associated with “extreme weather” for respondents whereas climate change called to mind general weather patterns.

In many cases, use of the term global warming instead of climate change would be factually wrong in a story, considering the definition above. But many other stories could likely use either one interchangeably. Journalists may want to consider their audience, their topic and their goals for a particular story in determining which term is best used.