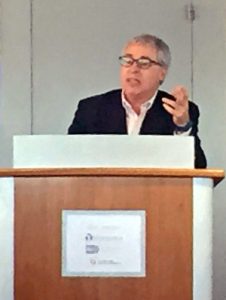 A large geroscience meeting in New York last month made me wish I had paid closer attention in my high school biology class.

Experts in the science of aging and researchers in clinical, translational and basic science from the fields of cancer, diabetes, HIV/AIDS and brain health met at the Disease Drivers of Aging: 2016 Advances in Geroscience Summit on April 13-14 to discuss key disease drivers of aging.

The event provided plenty of story ideas, as well as potential sources, for journalists reporting on aging issues. Among the topics discussed: How do certain diseases accelerate aging? And how is aging possibly connected to acceleration of these diseases?

While it is generally accepted that there is an association between aging and chronic disease, Felipe Sierra, PhD., director of the NIA’s Division of Aging Biology, noted that science still is trying to pinpoint the exact mechanisms – down to the cell level – to understand how the basic biology of aging helps science and medicine address major health concerns. “Everything is interconnected,” he said, as he walked the audience through the seven pillars of aging.

There are still so many open questions, he said, including:

Comorbidities (the simultaneous presence of two chronic diseases or conditions in a patient) are very common in aging, and Sierra who believes the scientific community should rethink the common “war of X disease” approach. Treating these conditions is not the same as confronting an infectious disease, he said, and additional factors of decreased resilience and increased frailty can alter the trajectory rate of both aging and the disease.

Aging underlies every disease of modern life, said Steven Austad, PhD, director of the Nathan Shock Center of Excellence in the Basic Biology of Aging at the University of Alabama, Birmingham.

People may be living longer, but also end up coping with chronic pain, loss of vision, heart disease, and other long-term conditions, Austad noted. “We’re getting better at delaying death, but there are costs to this, including the unanticipated outcomes of increased cases of dementia, greater frailty, and reduced quality of life for many people.”

“As more people live longer, this could lead to staggering costs of care around the world,” he said, adding that women could be especially hard hit because they tend to outlive men. If we can treat the underlying causes of aging, we may delay the underlying consequences of aging too, he believes.

Scientists are making strides in determining the effects on aging of therapies used for a variety of diseases, such as Rapamycin, which is used for transplant patients and some cancer patients, and Metformin, which treats Type 2 diabetes. Several key experiments on mice have proven highly successful. However, trials in humans are years, if not decades, away.

One thing we do know is that stress places an enormous burden on aging at the cellar level, said Elissa Epel, PhD, a professor of psychiatry at the University of California, San Francisco, and director of its Aging, Metabolism, and Emotions Center.

Telomeres, a part of our DNA that affects cell aging, can shorten under stress. When a disease such as cancer or diabetes stresses the body, the length of the telomere shortens, causing cells to age faster. That can also hold true when humans encounter “toxic stress” (such as domestic violence, caregiving, work), or the long-term effects of early childhood stress related to abuse, trauma or childhood cancer.

“Every day, our behavior is related to telomeres in an inflammatory state,” Epel said adding that by increasing our daily well-being, we can help maintain our health.

Other researchers are investigating possible associations between healthy aging and the possible impact of treatments for HIV/AIDS, cancer, diabetes or cardiovascular disease. One study is looking at gay men who survived the AIDS crisis of the 1980s and how the treatments they underwent may have affected their later cognitive decline in older age. Did anti-retroviral drugs affect brain function? If the HIV virus was suppressed, did any associated dementia decrease?

Another study is examining chemotherapy’s effects on cognitive decline.

Diabetes is yet another chronic disease that appears to drive accelerated aging, according to Nir Barzali, MD, director of the Institute for Aging Research at the Albert Einstein College of Medicine in New York City. “We need to identify mechanisms in which hyperglycemia and complications affect the process,” he said.

There are dozens of questions about the interactions of chronic diseases and aging, said the NIA’s Sierra. He is optimistic that collaboration between aging researchers and those working on specific aspects of chronic diseases will pay off in the long-term, since biomarkers of aging and biomarkers of disease seem to have commonalities. Common pathways and interactions are worth pursuing, with the goal of determining whether certain interventions, such as exercise or some drugs, can address both the biology of aging and the biology of disease.

The Geroscience Summit is a program of the New York Academy of Sciences, The Gerontological Society of America, The National Institutes of Health and the American Federation for Aging Research. Notes and multimedia from the April 14-15 event will be available soon. Journalists can contact NYAS media relations for information.

1 thought on “Scientific summit explores the ‘disease drivers’ of aging”