View all posts by Tara Bannow → 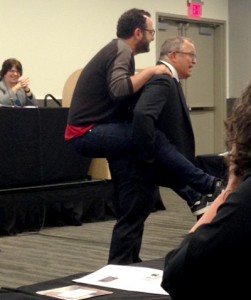 Photo: Tara BannowColin Milner, CEO of the International Council on Active Aging and publisher of the Journal of Active Aging, carried an audience member on his back to demonstrate the effects of carrying extra weight.

Saturday’s “Aging well” panel at Health Journalism 2016 featured what might well be a first for the Association of Health Care Journalists’ annual conference: a piggyback ride.

Colin Milner, chief executive officer of the International Council on Active Aging and publisher of the Journal of Active Aging, implored an audience member to hop on his back. He proceeded to pace around for a few minutes, remarking that he was feeling the effects of carrying extra weight.

“What happened with John hopping on my back is what happens in real life,” Milner said. “By midlife, we begin losing our functional abilities.”

Carrying the extra weight, however, helped Milner build up his strength, which he said will help him as he ages. The importance of functional ability, one’s ability to continue to maintain independence by carrying out daily tasks like cooking and driving, was a key concept of the discussion. Aging experts like Milner insisted it’s not so much someone’s age that’s important, it’s what they’re still able to do.

“I don’t really look at the number anymore,” said Ronan Factora, M.D., a physician in the Center for Geriatric Medicine and co-director of Cleveland Clinic’s Aging Brain Clinic.

People can extend the amount of time they’ll possess functional ability, the experts asserted, by making healthy choices early in life: by eating well, exercising, refraining from smoking and drinking alcohol in moderation.

The decisions to smoke or not eat well “is going to come back to haunt you,” said Factora, who also serves as professor of medicine at the Cleveland Clinic Lerner College of Medicine and Case Western Reserve University.

Most of Factora’s patients are already well into their senior years, so his job is to try to limit the extent to which poor decisions decades ago negatively affect his patients today. For aging adults, keeping a strong social network of people and participating in leisure activities work to retain their functional ability in addition to the more obvious diet and exercise factors. Preventive strategies like cancer screenings, vaccinations and regular doctor visits help, too, he said.

Those healthy habits can also help reduce the number of medications Factora’s patients have to be on. He routinely sees people with multiple chronic conditions who are taking at least five medications and up into the double digits.

“This is something I love doing: reducing medications,” he said.

Although people tend to look for blanket solutions that will improve the life of seniors across the board, the truth is that no two individuals age the same way, so they all require different approaches in accordance with their lifestyles, Milner said.

To illustrate that point, he showed the audience side-by-side photos of Rolling Stones front-man Keith Richards, looking haggard and sporting a cigarette out of the corner of his mouth, and actor Patrick Stewart, looking jovial and tan standing shirtless on a beach. Richards – well known not only for his voice, but for years of drug use – appeared much older. But at 72, Richards was three years younger in the photo than Stewart.

Adan told the audience she had learned through her research that journalists experience some of the highest rates of stress of any profession.