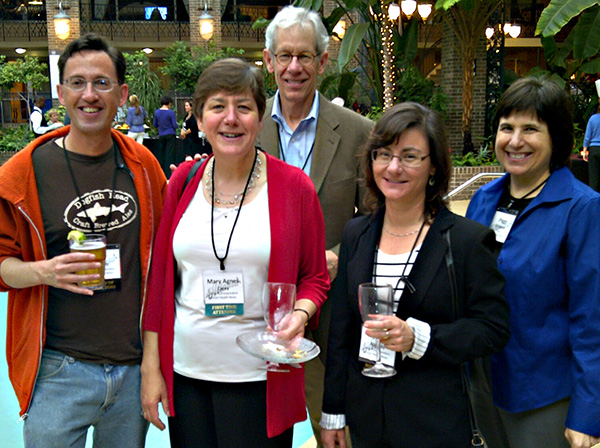 Photo courtesy of Phil GalewitzPeggy Girshman (right) was a treasured member of the Kaiser Health News team. In this photo from Health Journalism 2012, she appears with colleagues (left to right) Phil Galewitz, Mary Agnes Carey, John Fairhall and Julie Appleby.

Peggy Girshman, a health journalist who was one of the earliest members of AHCJ, died Monday at home. She was 61.

Girshman, who worked at NPR in several editing positions for 15 years and was an executive editor at Kaiser Health News, died of amyloidosis, reports Joe Neel of NPR.

Late Monday afternoon, her heart simply stopped. Heroic efforts were made to revive her, but they failed.

“Peg went out like a true journalist, at her desk, writing,” said her husband, Mitch Berger, on Facebook. She was also playing Scrabble online with Berger’s brother Dan, her archnemesis. “Let the record show that she was winning,” Berger said.

Reporters and editors around the country are mourning Girshman, remembering her as a mentor as well as a top-notch journalist. 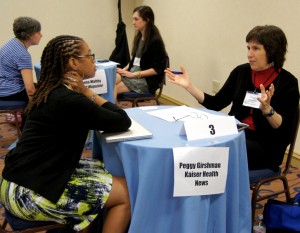 Photo: Pia Christensen/AHCJGirshman frequently met with writers at AHCJ’s annual Freelance PitchFest, as she did in 2012 in Atlanta.

Phil Galewitz, a senior correspondent and one of the original reporters hired in 2009 by Kaiser Health News, shared some memories of Girshman:

Peggy was a shining light at KHN from the day I met her on my job interview on a cold January day in 2009. She accompanied me to a Capitol Hill briefing that day then let me use her office computer to write a story about it. Even during that day, Peggy made me feel at ease with her smile, laugh and genuine warmth – even when discussing national health policy. She was a brilliant editor who would always make my stories better. The success that KHN has enjoyed is much a result of Peggy’s vision, passion and hard work.

Yet, when I think about Peggy, it’s mostly about her being a great colleague and friend. In my first year in Washington, Peggy knew I was on my own and invited me to Rosh Hashanah services with her. She let me borrow her station wagon when I needed to change apartments. Peggy and her husband, Mitch, would almost always be fixtures at KHN baseball game outings at Nationals Park that I would organize, including one last summer. An ex-New Yorker, she was a Mets fan just like me.

I’ll miss her guidance and wisdom, but mostly her warm heart and contagious smile. And I’ll always be grateful – not just for her helping to bring me into the KHN family – but for being my friend.

I knew Peggy for more than 20 years, first as a colleague I occasionally crossed paths with, and later (more importantly) as a friend. We never worked together directly but I learned from her nevertheless — about health care, about journalism, and most importantly, about keeping your humor and humanity in the face of a grueling and relentless illness. My heart goes out to Mitch, and to all of us who thought we’d have her a little bit longer.

Peggy was smart, energetic and fun.  We first met when we worked together at Congressional Quarterly and then I joined her at Kaiser Health News.  She was kind and generous, always sharing her expertise, offering a kind word (and most likely an awesome piece of chocolate) if you were having a bad day.

She knew a ton about health care and loved great storytelling.  The first year I judged an AHCJ contest I was paired with Peggy.  We were judging the first round of a category and Peggy walked out of her office, holding one of the entries in her hand. “This one is going to win the whole thing,” she said, and she was right.  Countless times her health care expertise along with her background on radio and TV helped me figure out a way to explain a complicated health care topic in a simple way.

She loved to travel and always brought back treats to the newsroom when she and Mitch went somewhere. You knew her first day back in the office meant that there would be something yummy waiting for you. After she retired from KHN she’d visit the newsroom, bringing along tons of chocolate with her for the “chocolate drawer” in the newsroom.  The newsroom would buzz when Peggy was in for a visit. We loved her and will miss her terribly.

A couple weeks ago, Peggy came into my office. We caught up on her life, on my life, and she was terribly hopeful – in typical Peggy fashion.

I won’t go into detail about what Peggy meant for my life, but she was my mother away from Denver (“Andrew, you can always stay with us.”). She was a fantastic boss (“Don’t worry about it,” no matter what it was.). She didn’t let me quit, twice, when I wanted to leave KHN (The first time: “What do you want to do here?” And the second: “No. Just do it from home.”)

Peggy never bullshitted me. She told it how she saw it, it just so happened that how she saw it was exactly what I needed, and she always did it with such optimism, cheer and grace that she could tell me that I screwed up and make me feel entirely loved in the same sentence.

That day she came in my office, she brought me one of my favorite things, Reese Peanut Butter Bells. (They were on sale at CVS, to be sure.) She placed two down on my desk. Those two became four and eventually nine. “You need these,” she said.

That was Peggy. She put two down, and you ended up with nine because she couldn’t help but pour it out.

Joanne Silberner, an artist in residence in the University of Washington’s Department of Communication who covered health and medicine at NPR for 18 years:

Like everyone who ever met Peggy, I fell in love with her immediately. I met her 25 years ago, and I can say today that she was the kindest and most generous person I’ve ever known. She was smart, and funny, and inclusive – I’m betting dozens of us felt like her best friend.

I hate when people claim they knew what someone who’s died would be thinking, but I’ll go ahead and say the last thing Peggy wanted was to be mourned. If anything, we should be celebrating everything she did – training reporters and editors, co-founding Kaiser Health News, setting a standard for honor and integrity and accuracy and passion in journalism, and so much more.

I never had a problem she couldn’t solve with a good listen, honest advice or some homemade chocolate desserts.

During her long illness and several hospitalizations, she never complained, at least not to me. But she did report – she used her medical experience as a chance to learn more about the health care system, and earlier this year she even gave a talk on health care delivery at the Mayo Clinic, where she received some of her treatment. Her biggest concerns were for her beloved husband Mitch, and that she was stressing her friends, and that on her trips for treatment, she missed her dog, Kirby. I never heard anything ever about how unfair it was that someone who cared so much about her friends, about journalism, about helping the public understand what was going on with health care, should be hit with such a cruel disease.

Peggy was a lot of things – funny, warm, and, as many know, a chocoholic, who would always share some of her stash. She was also a fabulous journalist, never pretentious, always curious. When editing, her enthusiasm for the subject was always apparent, no matter how wonky the topic. She cared deeply about journalism. But, even more, she cared about her staff, her family and her friends. At her own retirement party from Kaiser Health News – she brought gifts for each of us! And they were all so perfectly tailored to each of our interests.

She went out of her way to be there for her staff.

During the rollout of the Affordable Care Act, KHN staffers appeared weekly as guests on CSPAN’s live morning show, “Washington Journal.” We’d show up, a little anxious, wondering what on earth some of the callers to the program might ask and whether we’d have an answer. Despite the early hour, Peggy would always be there in the green room, to offer snacks, calm nerves – and say “good job” after it was all over. That meant more to me and the others than she knew. I wish I had half her optimism and good humor. She leaves us too soon, but I feel blessed to say I worked with her and that she was my friend.

Yesterday I lost my godmother and mentor, Peggy Girshman. You only need to look at her [Facebook] page to see how important she was to public radio and to so many people. She understood the importance of snacks in a newsroom, of bearing witness and of stories that make a difference for the people who hear them. there’s too much to fit in a dumb Facebook status (her commitment to her Blackberry, her love of diving, her and Mitchell’s amazing latke parties…) but I felt like I needed to say this: I would not be anywhere [near] I am today without her guidance, generosity, wit and unwavering dedication to our work. Love you, Peg, hope I keep making you proud.

Laurie McGinley, staff writer at The Washington Post who was co-founding editor of Kaiser Health News with Girshman:

Peggy loved one thing more than journalism: good chocolate. And her family and close friends were a close second and third. So I guess that’s 3 things. The people she brought alive in her stories seemed like characters in a peggygirshman sitcom. She was super loyal but wanted to have a good time – so she and Mitch would go all over the globe snorkeling and skin-diving. She was always telling me about Drew and Matt: “Don’t worry about what they want. They don’t know what they want.” True words for bosses everywhere. She was fearless.

Peggy’s legacy as a journalist is remarkable. At KHN, she was not only a founding editor. She created the spectacularly successful three-way partnership with NPR, public radio stations around the U.S. and KHN. That brilliant initiative will continue to be a cornerstone.

But that’s only half the story. She was a warm, exuberant, super smart colleague who – last but not least – made sure the candy drawer was filled. Especially with dark chocolate.

Earlier in her career Girshman was a producer for television stations in Washington, D.C., WNET-New York Public Media and for several PBS series. According to her bio on the Kaiser Family Foundation site, she was senior medical producer at Dateline NBC and an executive editor of CQ Politics. She received a national Emmy award and two Peabody awards for covering health policy and was a co-winner of the AAAS science-writing prize.

Many more of you have more comments and memories and I hope you’ll share them with all of us in the comments section.