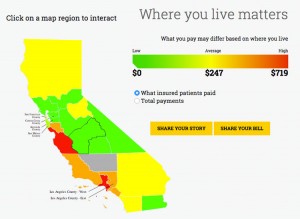 California has embraced the Affordable Care Act in big way. It launched one of the first and most robust state-run health insurance exchanges, and expanded its Medicaid program (known as Medi-Cal) to enroll the uninsured.

As a result, the state’s uninsured rate dropped from 6.5 million residents in 2013 (which is 17.2 percent of the state’s population) to 4.8 million last year (12.4 percent), according to the U.S. Census Bureau. (See AHCJ’s coverage of the bureau’s latest data release here and here.)

But, like 44 other states, California continued to earn a failing grade in how much data it made available to the public about the cost and quality of hospital and physician care. The state’s Department of Insurance (DOI) on Sept. 21 addressed that deficiency by announcing a collaborative effort to publish price and quality data statewide.

The Center for Healthcare Value at the University of California San Francisco, Consumer Reports, and the DOI have launched California Healthcare Compare, a website publishing the prices that California consumers and insurers pay for certain services.

The initiative is significant because in July, California was one of 45 states that received a grade of F (on a scale from A to F) in price transparency in the latest Report Card on State Price Transparency Laws from the Catalyst for Payment Reform and the Health Care Incentives Improvement Institute. Given the work of California Healthcare Compare, California’s grade will rise when the next report is published, said Suzanne Delbanco, CPR’s executive director, and Francois de Brantes, executive director of HCI3.

California Healthcare Compare includes average prices for what insurers pay, consumers pay, the total paid and a range of prices in 18 regions of the state and for more than 100 medical conditions and procedures, according to state Insurance Commissioner Dave Jones. The data illustrate dramatic price differences depending on where consumers seek care.

Consumers may be surprised to see such a wide range in prices, Chad Terhune reported in the Los Angeles Times. “For instance, the amount paid for a total knee replacement ranged from $18,493 to $47,399 in west Los Angeles County,” he wrote. “For that procedure, consumers also can see individual hospitals rated for quality on a scale of 1 to 5 for joint replacement surgeries.”

Adams Dudley, M.D., director of the University of California, San Francisco Center for Healthcare Value, helped develop the online tool. “I think this is a big step forward,” he told Terhune. “We’re moving in the right direction.”

The site uses information from government and private sources to also publish quality ratings for hospitals and doctors. Making quality ratings available to the public is another significant element of the California initiative because few states publish such data.

While the site offers an extensive set of price and quality data, consumers cannot determine what they would pay to specific providers for specific kinds of care. For that level of data, California would need an all-payer claims database like that available in New Hampshire and Massachusetts, Beth Kutscher reported in Modern Healthcare.

Jones hopes consumers will insist on getting such information, he said.