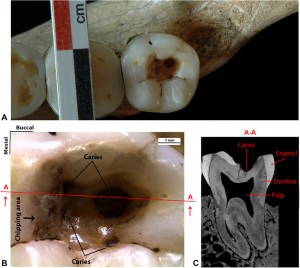 Image via Nature(A) Occlusal view of the RM3. (B) Detailed view of the large occlusal cavity with the four carious lesions and the chipping area on the mesial wall. Section A-A is directed mesio-distally, passing through the larger carious lesion. (C) MicroCT slice of the Villabruna RM3 in correspondence with section A-A.

Scientists studying a decayed lesion within an ancient wisdom tooth say they have discovered the earliest known evidence of dentistry.

The cavitated third molar belonged to a young man said to have lived and died in Northern Italy during the Late Upper Paleolithic era.

Images from inside the 14,000-year-old tooth, obtained using scanning electron microscopy, disclosed a pattern of chipping and striations that researchers say were made using a tiny stone pick.

“Basically the infected tissue was picked away from the inside of the tooth carefully using a small sharp stone tool,” Stefano Benazzi, lead researcher and a paleoanthropologist from the University of Bologna, told Discovery News.

The treated tooth predates any undisputed evidence of dental and cranial surgery, currently represented by dental drillings and cranial trephinations, dating back to the Mesolithic-Neolithic period (about 9,000 –7,000 years ago).

The skeleton of the young man, known as the Villabruna specimen, was found in a rock shelter burial called Ripari Villabruna in 1988, but the work on the decayed tooth was overlooked until recently, Benazzi told writer Rossella Lorenzi.

Based upon the wear of the tooth’s enamel, the researchers determined that the chips and marks were made before the man died. Their findings are described in a paper published July 16 in Scientific Reports.

Evidence of prehistoric dental treatments are very rare. Until now, the earliest examples dated back to Neolithic times when the rise of early farming and carbohydrate-rich diets are believed to have contributed to an increase in tooth decay.

“The Villabruna specimen is therefore the oldest known evidence of dental caries intervention, suggesting at least some knowledge of disease treatment before the Neolithic,” the researchers wrote.

The earliest evidence of an actual dental filling was found in a 6,500 year old Slovenian tooth. Traces of dental drilling made by a more advanced tool, a bow-drill, have been detected in 9,000 year old dental remains found in a Neolithic graveyard in Pakistan, they said.

“Ancient Greeks and mainly Romans were acquainted with caries removal by drilling and cleaning the infected cavity, and Egyptian texts confirm this practice was established at least in the fifth millennia BP” (before present) the researchers wrote.

Sarah Kaplan was another of the reporters to pick up on the news. Her account was featured in the Washington Post’s Morning Mix column.

“Because this discovery predates the written word, we’ll never know for sure whether Paleolithic people dreaded seeing the dentist the way their modern descendants do,” Kaplan wrote. “But based on the description of the treated tooth, the process had to be unpleasant.”