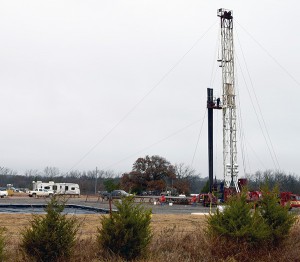 If you cover health issues (and even if you don’t), the best angle is making itself more apparent every day. Recent research conducted in Pennsylvania and published in Environmental Health Perspectives shows an association between dermal and upper respiratory symptoms and proximity to gas wells.

“Researchers found that even when accounting for confounding variables, such as age, cigarette smoking, education level and occupation, residents who lived less than a kilometer away from a gas well reported more health symptoms than those living more than two kilometers away from a gas well,” wrote Kim Krisberg in The Pump Handle.

This research does not establish causation, but it does venture toward the conclusion made in 2013 by researchers in The Annual Review of Environmental Resources: The unmet need for “short- and long-term studies of the potential effects of unconventional energy extraction on human health” could have serious consequences.

Also in 2013, researchers in Public Health Nursing said the rising tide of unexplained health complaints near drilling sites warranted more scrutiny. “The economic exuberance surrounding natural gas has resulted in insufficient scrutiny into the health implications,” they wrote. “Nursing research aimed at determining what effect unconventional drilling has on human health could help fill that gap.”

Now, a few studies in the vein of the most recent EHP research have worked to fill that gap, and the preliminary results are concerning. But why are scientists so interested in the health effects of fracking in the first place?

The chemical cocktails used in fracking contain highly toxic chemicals, carcinogens and endocrine disruptors, which drillers don’t have to publicize if they apply for “trade secret status” for their formulas. But if they aren’t careful, some nasty byproducts can escape into the atmosphere and groundwater. According to the Geological Society of America:

Of course, each chemical requires a different exposure route and dose to have toxic effects, and the variety of chemicals present at different stages of drilling makes it more challenging for researchers to determine dose-response or causation.

But it’s certainly not impossible. Coverage of unexplained health events can draw attention to a research need, so you can start by investigating the health status of people who live near drilling sites in your community.

Other potential stories include:

Here are some resources for locating fracking operations in your area and understanding the process. Reporting requirements differ from state to state, so maps may be missing certain information.