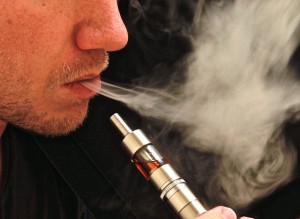 Electronic cigarettes, or e-cigarettes are growing in popularity among American adults, and while some states restrict their use by minors, nearly 1.8 million American middle and high school students reported using them one recent year, a federal study found.

The battery-powered devices work by vaporizing a liquid solution that users inhale. They are sold in various flavors, including mint and chocolate, and typically contain nicotine as well as a propellant to create the vapor.

Manufacturers promote e-cigarettes as safer alternatives to conventional cigarettes and as tools for smoking cessation. Yet researchers point out that there is a dearth of scientific evidence regarding the effects of e-cigarette vapors on the lungs.

A laboratory study published in September suggests vapor from e-cigarettes may cause damage and raise the risk for respiratory infections among young people. In the lab, the vapor triggered a strong immune response in the epithelial cells of tissue samples donated by deceased children and the exposed cells appeared to be more vulnerable to infection by cold-causing rhinovirus, according to the research article, published in PLOS One. According to the study, even nicotine-free vapor increased the risk of infection.

HealthDay News reporter Dennis Thompson, who has been following the research on e-cigarette safety, took a look at the findings this month in a story posted on WebMD.

“Epithelial cells are the first line of defense in our airways,” the study’s lead author, Qun Wu, a lung disease researcher at National Jewish Health in Denver explains in Thompson’s article.

“They protect our bodies from anything dangerous we might inhale. Even without nicotine, this liquid can hurt your epithelial defense system and you will be more likely to get sick.”

Wu and his team placed the human cells in a sterile container in one end of a machine with an e-cigarette at the other end, Thompson notes. “The vapor spurred the release of IL-6, a signalling protein that promotes inflammation and an immune system response. This occurred whether or not the vapor contained nicotine, although nicotine appeared to slightly enhance the release of IL-6, the researchers said.”

An industry group representing e-cigarette manufacturers is stressing the limits of the study, pointing out that the tests involved cells in a lab, not actual e-cigarette users.

“Many in public health agree that the risks of vaping must always be considered in the context of the risks of cigarette smoking and traditional stop-smoking therapies,” Gregory Conley, president of the American Vaping Association observes in Thompson’s article.

“At the same time,” Thompson writes “Edelman said the study findings are ‘interesting and provocative’ and fit in with prior research on the effects of e-cigarette use.”