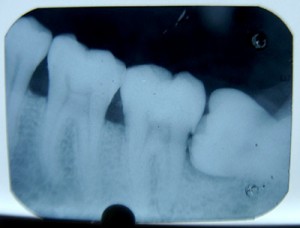 Americans spend about $3 billion annually getting wisdom teeth removed. But some experts are now questioning whether the procedure is always necessary, Elise Oberliesen recently reported in a story for the Los Angeles Times.

“Those who oppose automatically taking out those four teeth say ‘watchful waiting’ is a better path because the teeth and surrounding gum tissue might remain normal, making costly surgery unnecessary,” Oberliesen writes.

The four back teeth, also known as the third molars, generally erupt in young adulthood. But they sometimes only partially break through the gum. The teeth can become impacted because there’s not enough room in the jaw. Impaction can lead to decay, inflammation, the formation of cysts and other problems.

Many dentists routinely recommend the extraction of wisdom teeth whether they are causing problems or not.

“In most developed countries prophylactic removal of trouble-free wisdom teeth, either impacted or fully erupted, has long been considered ‘appropriate care’ and is a very common procedure,” notes a 2012 Cochrane review, cited by Oberliesen in her story.

Yet the procedure can be costly and, is not without risks due to anesthesia, as Los Angeles dentist and consultant Jay Friedman points out in Oberliesen’s story.

“To extract a single wisdom tooth, depending on procedure complexity, tooth position and where you live in the country, insured people might pay from $300 to $600 on average per tooth,” says Friedman, who analyzed a survey of fees in 2013 from the American Dental Association.

“A person with good dental insurance might have to pay 20 percent of the fee out-of-pocket, as much as $320 to $500 for four wisdom tooth extractions,” Friedman notes.

Local or general anesthesia may be administered to perform the procedure.

“Most wisdom teeth extractions could be done with a local anesthetic, in which the patient is awake and able to communicate with their dentist, says Friedman, a vocal critic of routine wisdom teeth removal and of routinely turning that job over to oral surgeons, who can administer general anesthetics. A general anesthetic, which makes the patient unconscious, Friedman says, is used too often and costs more, Oberliesen writes.

Richard Niederman, chairman of the department of epidemiology and health promotion and director of the Center for Evidence-Based Dentistry at New York University tells Oberliesen he agrees with that finding.

Niederman advises anyone weighing the risks of wisdom tooth removal to ask “What’s the relative benefit?”

“If the tooth is not diseased, leave it in. If it is diseased, then consider taking it out,” Niederman tells Oberliesen.

“He urges patients and dentists to focus on the current state of health and avoid predictions that may or may not prove true,” Oberliesen writes.

3 thoughts on “Questioning the wisdom behind removing third molars”