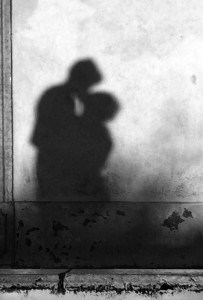 “Further research should look at the properties of the bacteria and the tongue that contribute to this sticking power,” Kort said in the story by BBC health reporter Smitha Mundasad.

The researcher noted that such investigations “may help us design future bacterial therapies and help people with troublesome bacterial problems.”

The researchers worked in collaboration with Micropia, the world’s first museum of microbes, Mundasad reported. The museum is part of the Royal Artis Zoo complex.

“In a newly opened exhibition, couples are invited to share a kiss and are provided with an instant analysis of the bugs they have exchanged,” she explained.

“A growing number of researchers are looking at the microbiome – an ecosystem of some 100 trillion micro-organisms that live in and on our bodies,” she reminded readers. “Scientists say these populations may be essential for health and the prevention of disease.”

In coverage of the study for ABC News, Liz Neporent offered this lede.

“There is perhaps nothing more romantic that a French kiss. Apparently there is also nothing more disgustingly filthy.”

Neporent went on to report “the more than 700 different species of bacteria that live and breed in the mouth are mostly healthy and beneficial.

“However, if ‘sharing salivary microbiota’ doesn’t sound like much of a turn on, consider these other ways of showing affection, along with their level of germiness,” she added. The story offered a helpful rundown of research into the number of bacteria exchanged in other types of contact, including regular kisses, handshakes, high fives and fist bumps.

An introduction to the microbiome