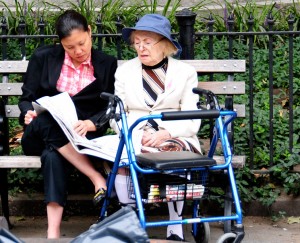 I knew next to nothing about the fast-growing assisted-living industry when I started reporting in early 2013 on problem homes in San Diego.

For example, I did not know that many seniors in today’s assisted-living homes are so frail and medically needy that they would have been in nursing homes 20 or 30 years ago. Many live in facilities with no medically trained staff.

Most astonishing to me was the lack of public access to state regulatory reports revealing the quality of care in homes, not only in California but nationally. We’re so accustomed to NursingHomeCompare and HospitalCompare – whatever their flaws – that the hoops families and journalists must leap through to judge an assisted-living home’s quality seem downright primitive.

With serious effort, important records can be tracked down, as my U-T San Diego reporting partners and I learned while working on “Deadly Neglect,” an investigative series produced by the U-T and the CHCF Center for Health Reporting.

The series pinpointed 27 deaths of seniors that stemmed from abuse or neglect at some of the 460 assisted-living homes in San Diego County.

One of the biggest collectors of medical data – Medicare – was of no help, because Medicare pays for hospitals and some nursing home care, but not assisted living. The industry is regulated by state agencies. They each determine how the public can access inspection reports and other documents.

For AHCJ members who want to dig into the issue, here are some shortcuts I wish I had known at the start:

In the end, the California Legislature passed 12 assisted living reform bills this summer, and Gov. Jerry Brown has signed at least two of them. Our series played a role, and so did A.C. Thompson’s ProPublica/Frontline series and the work of the Contra Costa Times and some other Bay Area News Group newspapers.

All three projects depended heavily on reporters who fought for access to state inspection reports. It was tough work, but it paid off. Today, California seniors and their families are better informed.