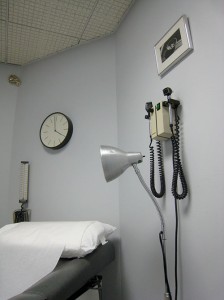 Health insurers and the federal Centers for Medicare & Medicaid Services (CMS) pay much different rates for clinical services, depending on where care is delivered. Typically, hospitals are paid more than physician practices for the same clinical service.

This payment variation has drawn attention recently: CMS and the Medicare Payment Advisory Committee (MedPAC) have proposed eliminating different payments based on the site of service. In May, MedPAC Executive Director Mark Miller said Medicare should address these price differences immediately to eliminate the incentive to deliver care in high-cost settings, wrote John Tozzi at Bloomberg Businessweek.

Last year, the Society of General Internal Medicine also called for eliminating the site-of-service differential in a report on payment reform (PDF). “Medicare pays $450 for an echocardiogram done in a hospital and only $180 for the same procedure in a physician’s office,” the SGIM report said, citing MedPAC data.

Such differences in payment are among the reasons hospitals buy physician practices. When writing about physician group acquisitions, health care journalists should ask if the new entity intends to charge more for the same services, resulting in higher costs to consumers and insurers. When consumers pay a larger share of the cost of care than they paid in the past, any increase in costs is significant.

Oncology drugs administered in a hospital outpatient department can cost twice as much as when those same drugs are administered in a physician’s office, PwC’s Health Research Institute says in a report, “Behind the Numbers, 2015.” Hospitals, for example, charge more than doctors’ offices charge to deliver the same drugs to patients with cancer, PwC says. Here are three examples from PwC:

“Once hospitals and health systems acquire in-house physician practices, they have the ability to immediately escalate physician charges to the higher hospital rate, which will likely trigger a rise in spending next year,” PwC reports. The Advisory Board covered this issue in its Daily Briefing earlier this week.

Eliminating higher payments for certain oncology-related services, such as chemotherapy, could save patients thousands of dollars, said Highmark Inc., a health insurer serving consumers in western Pennsylvania and West Virginia. In February, Highmark announced that, effective April 1, it would no longer pay more for chemotherapy drugs administered in hospitals and other high-cost settings.

“The dramatic increase in the cost of infusion chemotherapy treatment has been occurring in western Pennsylvania and other parts of the country as health systems and large hospitals purchase physician oncology practices, then bill for infusion chemotherapy services as a higher-cost hospital outpatient service, even though the treatment continues to be provided in a physician office,” Highmark said. Infusion therapy is administered intravenously or by a needle.

As a result of this policy change, Highmark members could save $1,000 to $3,500 or more for each treatment depending on the drug involved and how costs apply to each member’s deductible and copayment, said Donald R. Fischer, MD, the health plan’s chief medical officer. The change will have no effect on care quality, he added.

A health policy brief from the Robert Wood Johnson Foundation describes the proposals designed to eliminate the site-of-service differences in Medicare’s payment systems. Published in Health Affairs (PDF) July 24, the brief explains the origin of differential payments and the debate over approaches proposed for what are called site-neutral payments.

Sometimes a patient’s clinical condition requires treatment in more costly settings, the brief explains, but often the decision about where to treat a patient is discretionary.

Such discretion may lead some physicians or hospitals to deliver more services in high-cost settings. Earlier this year, a judge in the U.S. District Court in Idaho found that St. Luke’s Health System in Boise violated antitrust law when it acquired the Saltzer Medical Group, a 40-physician practice in nearby Nampa. During the trial, a consultant for St. Luke’s estimated that billing at the hospital-based rate rather than the physician-based rate would be more than 60 percent higher.

1 thought on “Medicare, insurers questioning payment differences based on where care is delivered”