News outlets duly noted the recent study showing that injuries and violence kill more young people in the U.S. than any other cause of death. But the coverage scarcely mentioned the researchers’ most troubling and revealing finding: How the burden of these deaths varies enormously by race, ethnicity and social class.

Take a look at figure 2 from the study showing age-adjusted suicide and homicide rates in the U.S. by race and ethnic origin in the year 2010. The unit of measure is the number of deaths by suicide or homicide per 100,000 members of each population: 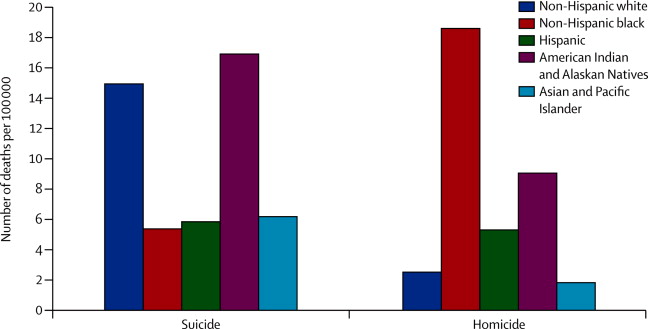 Generated with use of the CDC’s Web-Based Injury Statistics Query and Reporting System on Feb 19, 2013.Age-adjusted suicide and homicide rates in the USA by race and ethnic origin, 2010.

You can see that rates of suicide are three to four times higher among American Indian and Alaskan Natives and non-Hispanic whites than other populations.

What could account for such staggering inequalities? The authors of the study, which was published in the Lancet, conveniently provide an answer. Those excess deaths are a consequence of the kind of society we have built, a society that marginalizes certain classes of people, depriving them of high-quality education, job opportunities and healthy neighborhood living conditions:

Young people growing up in communities with concentrated disadvantage are more likely to witness violence, attend underperforming schools, and have poor employment opportunities; they are also more likely to be exposed to drug-distribution networks and can access firearms more readily than can young people not growing up in such communities. These social and environmental factors can greatly increase an individual’s risk of perpetrating violence and being a victim of violence. Thus, the link between socioeconomic status and injury is mediated by many conditions at home, at work, in communities, and within families and groups, with variations in effects noted across different types of injury. Social and economic factors fuel stress; challenge adaptation and coping mechanisms; contribute to social exclusion and isolation, residential instability, workplace pressures, and low community participation; and affect access to safe environments, safety equipment, and services. These factors can accumulate and interact to substantially affect experiences and risks. It is crucial that surveillance data and epidemiological research are used to improve understanding for the most vulnerable subgroups and to monitor progress in the reduction of disparities over time.

Neighborhood quality seems to have a powerful influence on the risk of violent death, so much so that some researchers are convinced that neighborhood environment explains the racial and socioeconomic differences in death rates. A study of homicide risk in Atlanta in the 1970s, for instance, found no differences in homicide by race when household crowding was used as a measure of neighborhood socioeconomic conditions.

And socioeconomic position may not protect the health of people who are well off when they live in poor environments. Regardless of your socioeconomic status, you are more likely to die of an injury if you live in an area with high poverty levels. The study that reached that conclusion found no link between individual social position and suicide, but a 50 percent increased risk of suicide for people living in neighborhoods with low socioeconomic status, high racial concentration and high residential and family instability.

Prevention programs and health services targeting various marginalized groups can do some good, but they are not enough, the authors of the recent Lancet paper assert. They say that the U.S. needs to do more to confront the root causes of the inequality with strategies that reduce bias and discrimination and improve access to employment, safe housing, and high-quality education.