Alan Scher Zagier is a St. Louis-based independent journalist who came to Missouri on a one-year teaching appointment at the Mizzou School of Journalism and decided to stick around. He spent 11 years with The Associated Press and has worked as a newspaper editor and reporter in Florida and North Carolina. He is attending Health Journalism 2014 on an AHCJ-Missouri Health Journalism Fellowship, which is supported by the Missouri Foundation for Health. 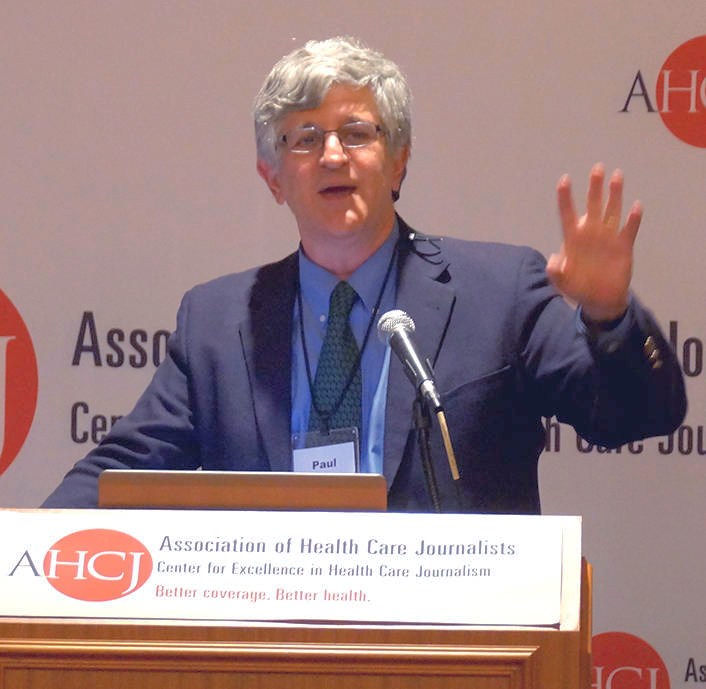 Paul Offit, M.D., has had it with the journalistic canard of false balance as a reflexive stand-in for objectivity – and he’s not shy about taking health journalists to task for their contributions to what he calls a skewed public narrative on the dangers of vaccines.

“You tell two sides of the story when only one side is supported by science,” the University of Pennsylvania School of Medicine pediatrics professor and scourge of anti-vaccine activists said at Saturday’s Health Journalism 2014 awards luncheon.

Offit singled out a Philadelphia television news station’s breathless report on a meningitis B vaccine offered to Princeton University students in response to a 2013 outbreak of a rare strain that was also found at the University of California-Santa Barbara. The report was entitled “Student Guinea Pigs?” and featured interviews with both Offit, chief of the Division of Infectious Diseases and director of the Vaccine Education Center at Children’s Hospital of Philadelphia; and Sherri Tenpenny, D.O., a vaccine critic. The reporter frames Tenpenny’s sound-bite with the jarring qualifier that while she “doesn’t hate vaccines,” Tenpenny has doubts about the vaccine made available to Princeton students.

“We should hold ourselves to a higher standard,” Offit said, recounting how he challenged the news segment’s producer in a follow-up call to “be a little more careful next time when you choose your experts.”

He called the low adolescent participation rate for HPV vaccines to reduce the sexually transmitted disease “our biggest national embarrassment,” the product of an irrational public fear of science he said is giving the public pronouncements of celebrities such as Jenny McCarthy and Kristin Cavallari the same weight as respected NIH researchers.

“Why do we care what these people say? Why do we keep beating this drum?” he said. “It’s very easy to scare people. It’s harder to unscare them.”

Most in the audience responded favorably to Offit’s call to arms, even with Power Point slide titles such as “The media doesn’t understand science.” Less certain was Offit’s understanding of the difficulty in reporting on complex medical topics when time, space and resources are at a premium. When a broadcast journalist asked for some advice on avoiding the false balance of dueling sources on a tight deadline, he advised to simply not report the story rather than produce a flawed piece of reportage.

“If that’s the way it’s going to be done, then it’s likely to be done badly,” Offit said.